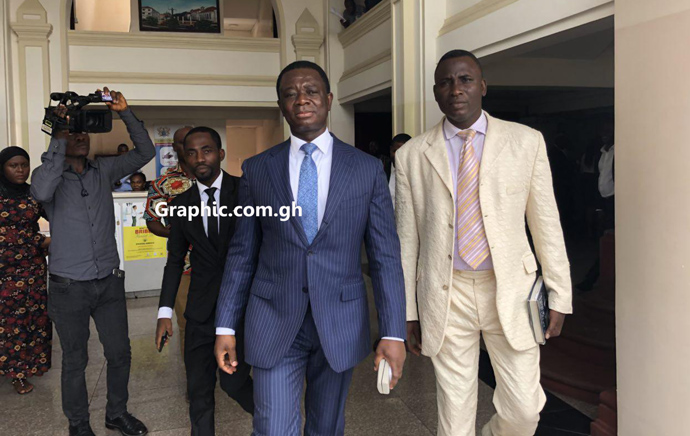 The Supreme Court has dismissed yet another application by Dr Stephen Kwabena Opuni which sought to recuse the trial judge hearing his alleged corruption case.

The former COCOBOD CEO is standing trial together with private businessman, Seidu Agongo, for allegedly causing financial loss of over GH¢217 million to the state in a series of fertiliser deals.

Dr Opuni had accused the trial judge, Justice Clemence Honyenuga, a Justice of the Supreme Court sitting as a High Court judge of bias.

He alleged that the trial judge had shown bias towards him by making prejudicial comment on December 9, 2021, that the evidence of his (Opuni’s) witnesses could not exonerate him except his own evidence.

Dr Opuni therefore filed a certiorari application before the apex court, urging it to quash a decision by Justice Honyenuga not to recuse him, and an application for prohibition, to prevent the judge form presiding over the trial.

However, in a ruling Tuesday (Feb 22, 2022), a five member panel of the apex court, dismissed both the prohibition and certiorari applications.

“We do not find any likelihood of bias by the judge for which reason we ought to prohibit him. The application is dismissed,” the court held.

The panel was presided over by Justice Prof Nii Ashie Kotey, with Justices Mariama Owusu, Lovelace Johnson, Gertrude Torkornoo and Henrietta Mensa-Bonsu, as the members.

The decision by the court means that Dr Opuni’s trial, which had been on hold was now back on track, with Justice Clemence Honyenuga continuing as the trial judge.

Dr Opuni has made numerous attempts to have Justice Honyenuga removed from the trial.

This is the second time he has gone to the Supreme Court on the issue of recusal.

In his first case, his application went all the way to a review panel of the Supreme Court where it was dismissed by a 4-3 majority decision.

That was after the court upheld a review application by the Attorney-General, Mr Godfred Yeboah Dame.

Agongo has been accused of using fraudulent means to sell substandard fertiliser to the COCOBOD for onward distribution to cocoa farmers, while Dr Opuni is accused of facilitating the act by not allowing Agongo’s products to be tested and certified as required by law.