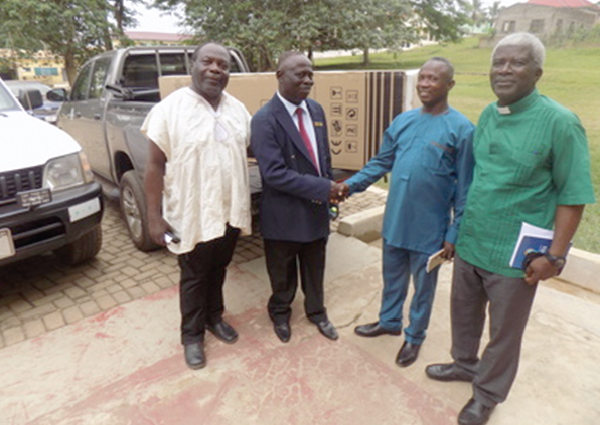 A South Africa-based medical practitioner, Dr Dan Mintah-Nimako, has donated a double-door refrigerator with a dispenser and a 55-inch flat screen television set valued at GH¢10,000 to the Oda Senior High School (ODASCO), his alma mater.

He has also adopted his former house at the school, Attafuah House, for renovation.

Dr Mintah-Nimako has further promised to award scholarship of GH¢10,000 to the best three candidates from the school in the 2022 West African Secondary School Certificate Examination (WASSCE).

At the presentation ceremony, Dr Mintah-Nimako stressed that as an old student, ODASCO had made him what he had become now.

He currently practices as a gynecologist in South Africa.

Dr Mintah-Nimako announced an education endowment fund for brilliant, needy students studying at ODASCO, and appealed for support for it.

In response to an appeal to help to re-roof the girls’ dormitory block which was ripped off by a rainstorm on May 17, 2022, the medical doctor promised to rehabilitate the building within the shortest possible time.

Dr Mintah-Nimako and his wife, Cynthia Mintah-Nimako, promised to make an initial amount of GH¢2,500 for the commencement of the rehabilitation of the damaged building.

The benefactor was accompanied by a fellow former student of ODASCO, Dr Richmond Eshun, who is currently the Deputy Chief Medical Officer, Department of Medicine, of the Korle Bu Teaching Hospital.

The Headmaster of ODASCO, Evans Boafo, received the items, and thanked Dr Mintah-Nimako for the donation.

He appealed to other old students of the school to emulate the example of Dr Mintah-Nimako to help develop their alma mater.