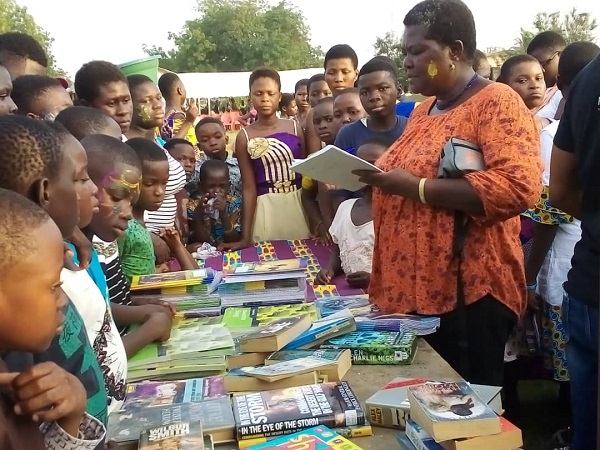 A non-governmental organisation (NGO) dedicated to the welfare of children and the empowerment of women, Nneka Youth Foundation has organised Christmas parties for school children at Juapong and Battor both in the North Tongu District of the Volta Region.

The children numbering over 3,000 in the two towns apart from being fed with food and soft drinks, were also given new and second hand clothes as well as exercise and reading books.

The Nneka Youth Foundation was supported by two other organisations, Food 4 All Africa Programme and the Tema Zone Branch of Goil Ghana Limited as well as other individuals.

At Juapong the Founder and Chief Executive Officer (CEO) of the NGO, Mrs Cecilia Fiaka said her organisation decided to make children from rural and deprived communities happy on festive occasions such as Christmas and New Year.

Make children happy
She said already about 10,000 of such unfortunate children had been served the treat by her organisation in the past years, adding "We love and care for these children for the past eight years continuously since its establishment in the year 2012.”
.
Put smiles on children
The gesture, Mrs Fiaka explained, was to put smiles on the faces of such underprivileged children in the society.

She advised parents to ensure that their children benefit from all the rights especially schooling, feeding, privacy and protected from any form of maltreatment, harassment and humiliation, among others.

Provide needs for children
According to Mrs Fiaka, because teenage pregnancy and drug abuse were prevalent at Juapong and Battor, parents should live up to their responsibilities by providing the essential needs of their children particularly girls, so that they would not solicit for money or any material things from men who may in the end impregnate them.

Don't force your daughters for men
At Battor, Mrs Fiaka expressed misgivings about parents forcing their daughters against their will to go out for men for a living and asked them to stop since such a practice adversely affects the girls.

"These children are our future so we must take good care of them so that they grow up to become responsible citizens", she stated.

For his part, the District Chief Executive (DCE) for North Tongu, Mr Richard Collins Arku who lauded the NGO's kind gesture, urged parents to take proper care of their children to make them realise their fullest potentials.

He told the children to take their studies seriously and make good use of the exercise and reading books provided so as to climb high the academic ladder in future.

The North Tongu District Director of Education, Mr Godwin Amelor who was worried about the teenage pregnancy situation in the area urged parents to stop their girl children from following men.

The men, according to the Education Director, would destroy "your female children's future of becoming doctors, nurses, teachers, lawyers and pharmacists among other professions.”

Don't sleep with men because of poverty
The Paramount Queenmother of the Mepe Traditional Area, Mamaga Sreku IV, was also not too happy about the attitude of children in the district especially female children sleeping with men because they were hungry.

"Don't sleep with men because you are hungry or due to poverty. It is a big mistake for parents to allow their female children to sleep with men. Don't allow one moment of hunger to lead you to unwanted pregnancy that will end your future dreams", the Queenmother advised both parents and the children.

Some of the children told the Daily Graphic that they were highly excited about the event and wished it would be repeated every Yulitide.

Nine women who were trained by the NGO to acquire entrepreneurial skills such as batik designing, detergent making, cassava flour production and processing, and beads designing were given certificates.