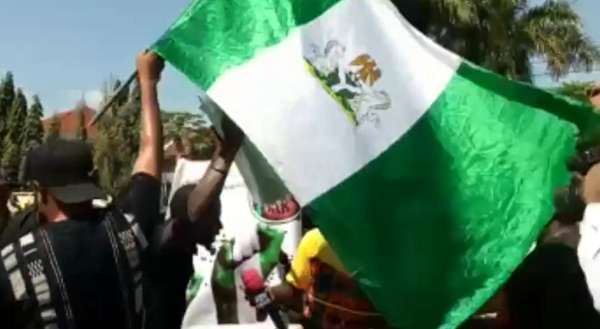 Some Nigerians in Ghana on Wednesday thronged the Nigerian High Commission in Accra to protest police brutalities in Nigeria.

The protest follows Tuesday’s #EndSars protest in Nigeria which turned bloody after armed uniformed officers reportedly opened fire on protestors at the commercial hub of Lagos.

According to Nigeria’s Punch newspaper, about 43  protesters and six policemen lost their lives in Tuesday’s protest.

The protestors who have been on the streets since Thursday, October 8, are calling for the Special Anti-Robbery Squad of the Nigeria Police to be disband.

Despite Nigeria’s President Muhammadu Buhari dissolving the unit on October 11, the demonstrations continued with calls for reforms in the security forces.

Some of the Nigerian youth who thronged the Nigeria High Commission in Ghana held placards and were in black attire to express their displeasure of the happenings in their country.

In a radio interview on Accra-based Citi FM, one of the protestors said “SARS was formed to take care of special armed robbery cases in Nigeria but down the line, we noticed when our youth are doing their hard work, they arrest them and kill them. When the police arrest a criminal, they ought to take the person to court and then sentenced by the court if the person is guilty, but they arrest people and take them to prison without putting them before a court and when we rose against that, they are now killing our people. As we speak now, there are a lot of our people in prison that their families are not even aware of.”

Another protestor said, “Yesterday we witnessed one of the most outrageous atrocities of our life as a country because our compatriots were being slaughtered point-blank by the Nigerian military under the command of President Buhari because the military does not take action except they are ordered to do so. More than 150 peaceful protestors who are protesting for a new Nigeria were gunned down, and we want the international communities and the world to know.”

Others are also calling for Ghana's President Nana Addo Dankwa Akufo-Addo, who is also the chairman of the ECOWAS to call for speak on the matter.

“President Akufo-Addo is the new chairman of ECOWAS, and he is silent but in times like this, silence means you are also supporting impunity and if this impunity in Nigeria is not stopped, it will spread to other countries,” another protestor said.

Meanwhile, President Buhari has called for "understanding and calm".

A statement from the presidency said President Buhari was committed to the implementation of police reforms.