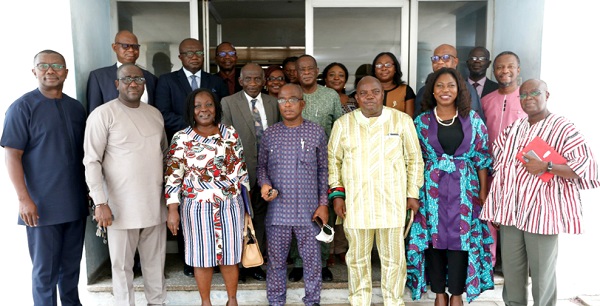 A nine-member board of the New Times Corporation (NTC), publisher of Ghanaian Times and Spectator newspapers, was on March 10, 2022, sworn into office with a call on the local union and management to work together for the progress of the corporation.

Similarly, the National Media Commission (NMC) swore in an eight-member governing board of the Ghana News Agency (GNA) in Accra last Wednesday, with a call on the newly constituted board to fast-track the re-enactment of the law establishing the agency.

The NTC board is chaired by a former Rector of the Ghana Institute of Journalism (GIJ), Dr Kwaku Rockson, and has Professor Kofi Quashigah, Victoria Natsu, Donald Gwira and Prof. Kwasi Opoku-Amankwa as members.

The GNA board, chaired by a former Editor of the Daily Graphic, Mr Ransford Tetteh, has Peter Claver Nibepwo Sangber-Dery, Ivy Hoetu, Daniel Addai and Dr N. A. Ibrahim Lartey, as members.

The rest are Dr Charles Kwening, Juliet Amoah and the General Manager of the agency, Albert Kofi Owusu.

Before swearing in the NTC board, the Chairman of the NMC, Yaw Boadu-Ayeboafoh, urged the corporation not to allow itself to be used as a receptacle for carrying falsehood.

He said publishing credible stories built trust among the public.

The NMC Chair urged the labour union of NTC to give the board all the needed support and continue working in industrial harmony.

Mr Boadu-Ayeboafoh also charged the new board and management of NTC to show interest in the pension remittances of workers to ensure a better life for them during retirement.

"You must ensure that all contributions towards social security and other pension schemes are paid regularly and consistently,” he said.

To the GNA board, Mr Boadu-Ayeboafoh said the NMC remained committed to protecting state-owned media organisations from undue political influence.

He urged collaboration between management and the new board towards the achievement of organisational goals.

“We need to work collectively because it is from our collective efforts that we will be able to make gains,” and cautioned the staff against disharmony,” the NMC Chairman said.

The Executive Secretary of the NMC, George Sarpong, commended the staff of NTC for their resilience and urged them to be committed and continue to work hard.

He urged the state media to publish stories that would ensure peace in the political arena.

"In a misinformation society like this, we will rely on professionals like you. The media can lead the process," he said.

He credited the NTC for surviving the turbulent times brought about by the COVID-19 pandemic.

At the GNA board inauguration, Mr Sarpong commended GNA for successes chalked up in spite of the numerous operational challenges over the years and urged members of the new board to build on the work of the outgone board.

Mr Adu Owusu said the management looked forward to working with the new board to address some of the challenges that confronted the NTC.

Dr Rockson, on behalf of the members of the board, described the task as an onerous one,and assured that "we will not take it lightly.”

The General Manager of GNA said the re-enactment would reposition the agency as a viable media organisation with a more business focus to generate significant revenue for its operations and the state.

Mr Owusu said GNA had initiated plans for the launch of a business and economic news reporting project to give a sharp focus to sectors of the economy towards projecting Ghana as the most attractive investment destination on the continent.

He said it had also rolled out digital operations on a pilot basis to take advantage of the digital revolution to expand news services covering a host of users.

The General Manager said in spite of funding challenges, the agency was pleased with the output and responses from subscribers.

Mr Owusu said GNA was also developing scheme of service with the assistance of the Public Services Commission to align the human resource needs with the operations of the agency with a corresponding remuneration, saying, a major concern of the agency was poor remuneration of its staff.

For his part, the GNA board chairman said the board would work towards ensuring that the agency retained its internally generated funds (IGF) to enhance its operations.

Mr Tetteh gave an assurance of the board’s commitment to continue with projects the outgone board initiated with some innovations towards sustaining the agency’s position as the reference point for media excellence.