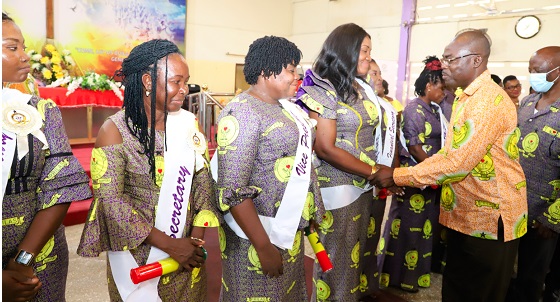 The Ghana Prisons Service (GPS) has inaugurated the 6th National Executive of the Prisons Ladies Association (PRILAS) with a charge on the members to work to improve the operations of the service.

At the ceremony in Accra last Wednesday, the PRILAS also inaugurated a 10-member board of the Corrections Reforms Platforms (COREP).
COREP is a non-governmental organisation formed out of PRILAS with the aim of working to improve prison conditions and lives of inmates, promote gender equality and enhance the human capital within the prison system.

The 10-member board of COREP has the Director-General of Prisons, Matilda Baffour as its Patron, with DOP Patience Baffoe-Bonnie, Assistant Director of Prisons Gilbert Hama and Chief Superintendent of Prisons (CSP) Dr Augustina Ama Boadu, as members.

The ceremony was on the theme “Leveraging the female human capital in the strategic development of correctional services; Empowerment for mastery”.

Inaugurating the two groups, the Director-General of Prisons, Isaac Kofi Egyir, commended PRILAS for their contribution to the Prison Service to achieve its mandate of ensuring the safe custody and welfare of prisoners and undertaking the reformation and reintegration of ex-convicts back to society.

He said to recognise the support of female prison officers, the Service had made an effort not to discriminate against them.

“There is an increase in recruitment of female officers despite the reduction of female prisoners’ population who were in seven female prison facilities across the country,” he said.

The Director-General noted that the Ghana Prison Service had ceased to be a male dominated institution saying, “this administration is determined to involve female officers at all levels in the administration of male prisons”.

He advised them to embrace the tasks and challenges of working in male dominated environments as the administration continued to gender mainstream its operations and personnel deployment.

He, however, urged them to organise training and development seminars to build the capacities of female staff and thrive in every sector.

The National President of PILAS, Director of Prisons (DOP), Technical Services, Patience Baffoe-Bonnie, in her inaugural address, expressed the commitment of the association to develop strategies to empower women to help achieve their objectives.

The objectives, she said included developing the hidden potential of members through relevant training programmes and offering counseling and other services to inmates to enable them successfully reform and reintegrate into society.

“Considering all the parameters above, the 6th Council intends to build a quality and desirable system of digitisation in all sectors. Members must, therefore, be resilient despite inadequate resources.

“To achieve this, it is of essence that we shy away from pity party and position ourselves as a solid force to reckon with.

“A solid platform for a good take off will be developed with a focus on Gap Analysis, Digitisation programs which seek to have females becoming very efficient and effective in Information Communication Technology (ICT) cyber security and cctv monitoring,” she said.