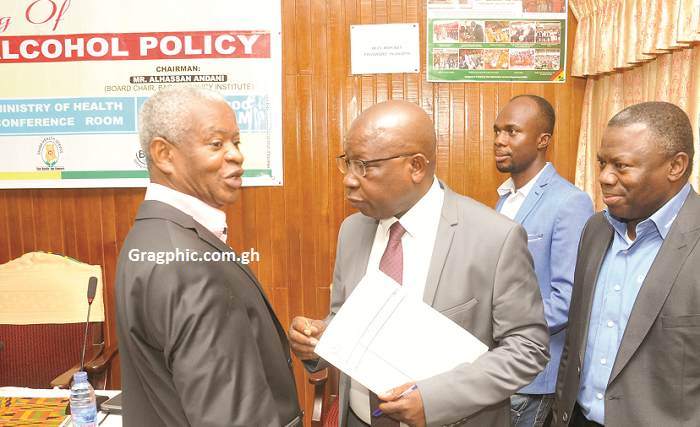 A national policy to regulate the production, distribution, sale, advertisement and consumption of alcohol has been launched in Accra.

The policy, which was developed by the Ministry of Health (MoH), with support from the Baraka Policy Institute (BPI), an advocacy group, and the World Health Organisation (WHO), is aimed at reducing the harmful effects of alcohol in the country.

According to local health authorities, at least 2.1 per cent of Ghana’s population, from 15 years and above, are heavy drinkers.

Launching the policy yesterday, the Minister of Health, Mr Kwaku Agyeman-Manu, expressed the hope that the implementation of the policy would culminate in the drafting of a legislation on alcohol use.

He said the harmful effects of alcohol use on productivity, performance and health could not be overemphasised and added that alcoholism could lead to poor performance, absenteeism, job loss and chronic illnesses such as liver and heart damage, stroke and other irreparable injuries.

According to him, by restricting the harmful use of alcohol among workers, the government would spend less in terms of rehabilitating those who had fallen victim to its abuse.

Giving an overview of the policy, the Chief Executive Officer (CEO) of the Mental Health Authority, Dr Akwasi Osei, said the policy was designed to minimise the negative impact of alcohol consumption on the individual, family and society as a whole.

Dr Osei also called for special strategies which would help reduce the production, sale and consumption of locally brewed alcohol.

The President of BPI, Mr Salem Kalmoni, said alcohol was destroying the youth of today and, therefore, launching the policy was the beginning of the actual process of putting in place binding laws to control its use.

For her part, the Chief Executive Officer of the Food and Drugs Authority, Mrs Delese Mimi Darko, also pledged the FDA’s readiness to help with the full implementation of the policy.