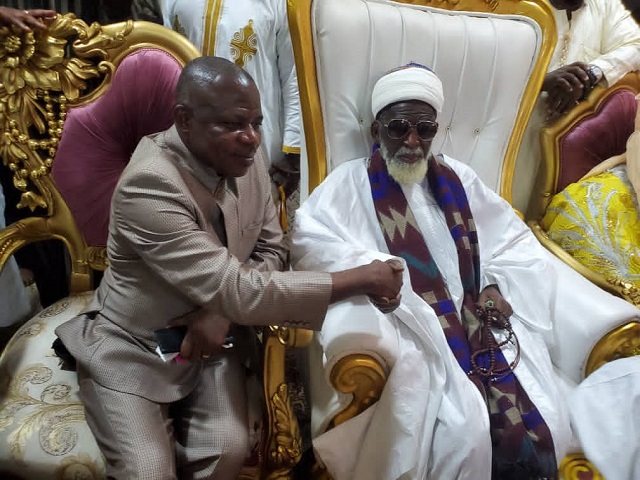 The National Chief Imam, Sheikh Osman Nuhu Sharubutu has commended the Ejurahene, Nana Osei Hwedie II, for his role in resolving a dispute between factions within the Ejura Zongo.

A dispute between the Ejura Imam and the Zongo Chief was on the verge of escalating to disturb the peace of the community, but the Ejurahene intervened to avert what could have been a full blown crisis.

He invited the feuding factions to his palace and settled the differences amicably.

Over the weekend, the Ejurahene led the two factions, the Imam and the Zongo Chief to the residence of the National Chief Imam for a final truce and advice from the revered Islamic cleric.

Sheikh Sharubutu praised the Ejurahene for showing leadership by intervening in the matter and also bringing them all the way to his residence.

The National Chief Imam urged the two factions to unite as leaders in the overall interest of their community.

“It is God who appoints leaders from communities, but as leaders, we represent the people and everything we do should be in the interest of the people we represent", Sheikh Sharubutu said.

"I urge you all to unite and be peaceful within the community so that future leaders will also emulate your good deeds" he added.

The Ejurahene requested the Chief Imam to pray for his community, and in response, the Chief Imam said Nana Osei Hwedie II has displayed the acts of good leadership and Allah will answer his prayers.