National Cathedral project on hold for lack of funds 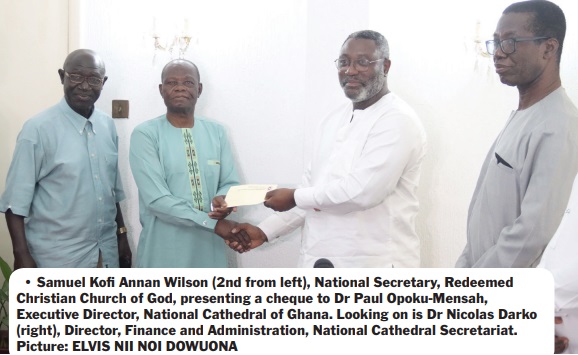 Work on the National Cathedral Project has stalled because of lack of funds.

Foundation works on the multi-million project have been completed, and that is all that has been done so far as the project is concerned.

The Executive Director of the National Cathedral Project, Dr Paul Opoku-Mensah, has, therefore, appealed to the Christian community in Ghana and the Diaspora to make financial commitments to help sustain and complete the project.

“At the moment, we have suspended the project a bit to ensure that we have adequate resources to continue. The worst part will be to have people on site and pay them while work is not going on,” he said.

He said although the contractors and their staff were on site, the workers had been sent home until there was enough money to continue with work.

“We hope that in the next couple of weeks, we can raise funds and begin work again. Our ability to complete this work is dependent on Ghanaians helping us,” he added.

Dr Opoku-Mensah made this known when the leadership of the Redeemed Christian Church of God (RCCG) called on him in Accra to donate to the Cathedral Project.

The RCCG, which is headquartered in Nigeria, donated GH¢11,500 to the project.

The National Secretary of the RCCG in Ghana, Samuel Kofi Anan Wilson, presented the cheque for the amount to the Executive Director of the National Cathedral Project.

Dr Opoku-Mensah said given that the Cathedral Project was of historical signifi cance to the consolidation of Christianity and also had economic value to the state, it was important for it to be pursued vigorously.

“The money we require is big, and Ghana has about 21 million Christians; so if one million of the Christians in the country decide to contribute GH100 a month for one year, we will be able to build this Cathedral to the glory of God,” he said.

He added that although the Cathedral was a religious infrastructure, it had been aligned with the country’s vision and aspirations.

The executive director also said the components of the religious edifice would place Ghana in a better position to be Africa’s Christian metropolis where religious tourism would thrive.

“The resources from these tourist activities will help in national development,” he said.

Dr Opoku-Mensah said while it was alright to criticise the Cathedral Project, conversation around the facility should not be reduced to partisanship but one of value and cost analysis.

“The church in Ghana and Africa needs this infrastructure more than the President needs it. Let us tell the good story and support it to materialise,” he said.

He further observed that the Cathedral would provide an opportunity for Christianity to be consolidated in Africa.

“Now that Christianity has become a dominant force in Africa, we need to seize the opportunity to transform Africa, and the National Cathedral will help in projecting it,” he said.

Mr Wilson, in his comments, said in spite of the fact that the RCCG was headquartered in Nigeria, it decided to donate to the building of the Cathedral because of its potential impact on Christianity in Africa.

“Since we have a branch in Ghana, we are part of the nation, and we need to participate in all that the state does. We are happy to donate to the building of the Cathedral that will be a symbol of national unity,” he said.

He appealed to all individuals and churches to also donate to ensure that the project was completed as planned.