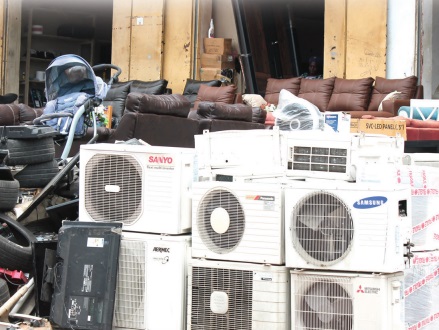 Ghana risks becoming an environmental dumping site for used electrical and electronic waste from Europe, the Energy Commission has cautioned.

For that reason, the country needs to strengthen its regulations to block the influx of electronic waste from other jurisdictions into its market.

Speaking with the Daily Graphic in Accra, the Assistant Manager in charge of Energy Efficiency Inspection and Enforcement at the commission,

“We deserve better as a people and Ghana definitely deserves better as a country,” he said.

According to the assistant manager, the commission, working through the Ministry of Energy, had tabled before Parliament a draft to amend parts of the Energy Efficiency Regulations, 2008 (LI 1932).

The regulation is a 14-year-old law that bans the importation or sale (distribution) of used refrigerators, air-conditioners and incandescent filament lamps.

When amended, the scope of the law will be expanded to prohibit other used electronic appliances, such as television sets, metal halide lamps, ceiling fans, standing fans, table-top fans, batteries for renewable energy systems, inverters and solar panels.

He further said the amendment would see the expansion of the ban on only three appliances to include more than 20 used appliances.

Besides, he said, under the new regulations, the commission would be clothed with the authority to seize the smuggled appliances on the market and also strengthen institutional collaboration.

“All importers engaged in smuggling and officials who aid and abet them will be liable for prosecution by the new law. The new regulations will also cause the importer to return the contraband items to the country of origin,” he said.

Beyond the parliamentary amendment being sought, Mr Zan said, the commission had also presented new regulations that set a minimum energy performance of all the appliances.

He noted that the minimum energy performance would help prevent new inefficient electrical appliances from entering the market.

“The quest to transform the appliances market in the country is a step in the right direction for Ghanaians.

“Consumers can now have options and be confident in the appliances they buy and also save some money on electricity bills,” the assistant manager said.

Also speaking with the Daily Graphic on the situation, the Chief Executive Officer (CEO) of Tino Solutions Limited, dealers in solar power installation, Postino Dugle, said the amendment to include the expanded appliances was a step in the right direction.

He said the steps taken by the commission to amend parts of the regulation would bring confidence into the industry and attract investment.

“If the appliances were that efficient, the person who decommissioned them would have continued using them, instead of shipping them to Ghana. And so they have either outlived their usefulness or are no longer required; that is why someone will decommission an appliance somewhere and another person will bring it into the country to be re-used,” he explained.

“For instance, if batteries for renewable energy systems, inverters and solar panels have 20-year lifespan and they have been used somewhere for 15 years and imported here, they cannot be used for long. How to dispose of them can even be a big problem for the country,” he added.

The CEO added that should provisions in-the-yet-to-be-amended regulation be passed and implemented to the letter, it would be a disincentive for anyone to engage in the smuggling of those appliances.

A Senior Research Fellow at the Centre for Climate Change and Sustainable Studies of the University of Ghana, Dr Bob Manteaw, said the provisions made in the amendment looked good on paper but implementation was what could be a problem.

“It is good we want to place a ban on those appliances, but we also need to build the required political will to strictly enforce the law,” he told the Daily Graphic.

The Daily Graphic of Saturday, August 27, 2022, carried a front-page story that said importers were still using fraudulent means to ship used refrigerators and their accessories into the country.

That was in spite of the Energy Efficiency Regulations, 2008 (LI 1932), which placed a ban on the importation or sale of used refrigerators.

The fraudulent activities, which sometimes took place under the noses of law enforcers, have generally been sustained by the high demand for and quick returns (profi t) on the appliances in the country.