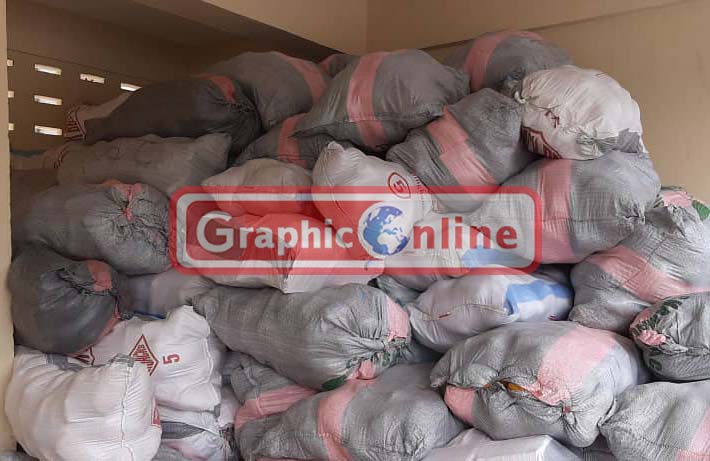 Some of the seized slabs of cannabis in sacks Follow @Graphicgh

A joint operation by the Narcotics Control Board (NACOB) and the Ghana Navy has led to the seizure of 12,555 compressed slabs of a substance suspected to be cannabis near Keta in the Volta Region.

The slabs, packed into 159 sacks, are said to be the largest cannabis haul in the country, with a street value of GH¢12 million.

One person, John Aristotle Nuade, 48, has been arrested in connection with the haul, while an intensive search has been mounted by the security agencies for the arrest of other members of the syndicate who have gone into hiding.

The Head, Communications, Media Relations and Protocol of NACOB, Mr Francis Opoku Amoah, told the Daily Graphic that using the road to transport cannabis had become so difficult for dealers in the banned substance due to heavy security presence at vantage points, so they had adopted a new modus operandi of using the sea to carry out their trade.

He said the drug dealers in the area now used large canoes and boats to transport the cannabis from the shores of Keta to various destinations across the country and the sub-region for sale at night.

According to him, the Volta Region was leading in the production of cannabis in Ghana, aside from the Bono, Bono East and Ahafo regions put together, the Eastern Region and parts of the Ashanti Region.

Mr Amoah said following the arrest and destruction of cannabis farms in the Volta Region, the drug dealers had adopted a new modus operandi of transacting business on the sea, where canoe fishermen carted the compressed slabs into bigger boats, which in turn transported the slabs to a number of destinations for sale.

He indicated that NACOB had been doing a lot of investigations as far as the cultivation and production of cannabis in the Volta Region were concerned, as a result of which a joint operation was carried out with the Ghana Navy within Keta and its environs on March 14, this year.

Mr Amoah said a team of 10 officials from NACOB and 11 from the Ghana Navy raided a makeshift wooden warehouse along the coast, where they managed to arrest a young man who was responsible for providing protection for the drugs at the warehouse.

The team retrieved 159 large sacks containing 12,555 slabs of the substance suspected to be cannabis, and during interrogations, the young man mentioned one E.K. as the owner of the warehouse and the drugs but could not tell E.K’s whereabouts.

Aristotle was then transported, together with the drugs, to Accra to assist NACOB in its investigations.

Aristotle was yesterday arraigned before the High Court in Accra and remanded in police custody to reappear before the court on March 31, this year.

Mr Amoah said depending on the quality and where it was sold, a slab of compressed cannabis was worth between GH¢1,000 and GH¢1,500, and so calculating with GH¢1,000, the street value of the seized cannabis was GH¢12 million.

He expressed the appreciation of NACOB to the Ghana Navy for the collaboration and support in the joint operation and added that the board looked forward to future collaborations with all other relevant state institutions to help achieve its mandate.

He warned those cultivating and producing cannabis that it was only a matter of time for NACOB to catch up with them.

He encouraged the public to furnish the board with information regarding any drug activity in the country, since fighting the narcotics a menace was a shared responsibility.