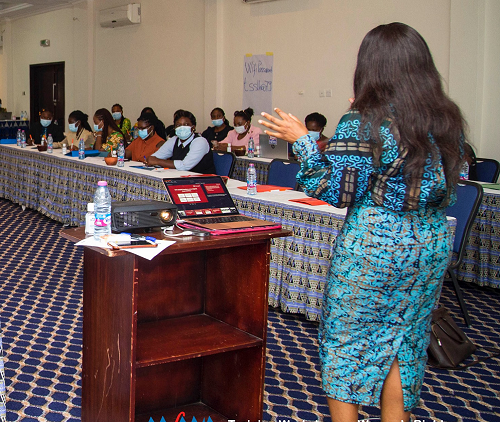 The Media Foundation for West Africa (MFWA) with support from the Embassy of the Kingdom of the Netherlands, has organised a training workshop for some selected female journalists, bloggers, social media activists, and women’s rights activist to improve their capacity to advocate for women’s rights online in Ghana.

The beneficiaries for the day’s training programme, numbering 120, are drawn from the Greater Accra, Volta, Eastern, Ashanti, Bono, and Northern regions.

The beneficiaries were trained on the use of the various social media tools and how to use such tools to create awareness on online rights of women and young girls in the country.

The MFWA’s Programme Manager for Freedom of Expression, Ms. Vivian Affoah, speaking with Graphic Online on Friday, October 23, 2020, said the rationale of the training is to increase public awareness and respect for online rights, particularly women’s rights online in Ghana.

She explained that the project which is being organised also in Liberia and Sierra Leone will improve the digital literacy of at least 200 female journalists, bloggers, and women’s rights activists in the beneficiary countries.

She said as a first step, a database of women journalists, bloggers and activists in Ghana, Liberia and Sierra Leone has been built by the MFWA.

Ms Affoah noted that the beneficiaries will be introduced to digital rights, digital storytelling, digital content creation, social media and online privacy and identifying as well as dealing with online abuses against women.

She expressed the worry that although the country’s internet ecosystem is expanding, there is a wide gender gap in terms of access, affordability and utilisation of the internet in the country, reflecting traditional gender inequalities offline.

“Women’s activities on Facebook, for example, is estimated to represent 36.5 per cent against 63.5 per cent by men,” she said, expressing the hope that the workshop will help to address the wide gender gap online.

The participants during the training were taken through practical sessions on how to use the various social media platforms to develop advocacy campaigns effectively and efficiently.