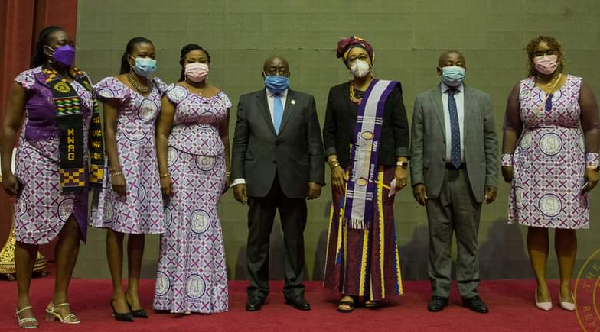 Female Ghanaian doctors who have contributed significantly to health development in the country have been celebrated.

The doctors, whose professional duties, have often taken them across the length and breadth of the country, mostly struggle under difficult conditions and in many instances under difficult circumstances to offer quality health care delivery in deprived communities in the country due to lack of infrastructure and basic health facilities.

The aforementioned notwithstanding, the doctors constantly offer their best in terms of service just to keep the country's health sector in good shape.

As Ghana marks the maiden edition of National Women Physicians Day, instituted to celebrate the first female Ghanaian doctor, Susan Ofori-Atta, a number of speakers who graced the occasion on Wednesday 8th December 2021, commended the medical practitioners fraternity for sacrificing to keep the health sector in good shape despite daunting challenges.

President of the Medical Women Association of Ghana, Dr Marion Okoh-Owusu, who welcomed participants to the grand celebration, enumerated a number of interventions accompanying activities being carried out by the organization to empower female doctors in Ghana.

Speaking at the event, President Nana Addo Danquah Akufo-Addo mentioned a number of incentives government has introduced to retain medical practitioners in the country.

He said the primary focus of government is to address the phenomenon of doctors declining posting to rural areas.

To this end, he said incentives have been introduced to boost the salary structure of medical professionals in the form of allowances.

He underscored the impact with an assurance that incentives would make brain drain a thing
of the past as government prepares to introduce more of what it calls deprived area incentives to health professionals in the country.

This, according to President Akufo-Addo, forms part of attempts to improve the
service conditions of medical professionals and also retain talents in the country.

The Medical Women Association of Ghana, at this maiden National Women Physicians Day celebration, honored the life and legacy of the late Dr. Susan Ofori -Atta, who was the first Ghanaian female Medical Doctor.

The Association also set aside the 8th of December annually to celebrate female Ghanaian Doctors and Dentists in recognition of their contribution to improving healthcare
delivery in Ghana.

At the event, some members of the family of Susan Ofori-Atta and the medical fraternity, eulogized
her for offering selfless service to the nation.

They described her as a through symbol of hope whilst recounting the footprint legacy she left behind.

President Akufo-Addo gave assurance that his government would work to
improve the service conditions of Doctors in the county.

Often, these professionals are rarely heard or seen in public spaces, but only in the corners of their offices or work spaces, carrying out what they know how to do
best.

This, according to President Akufo -Addo, is not the way to go. Some female doctors who have made significant contributions in their various fields, were rewarded.

They included the current President of the Medical Women Association of Ghana, Dr.Marion Okoh-Owusu.