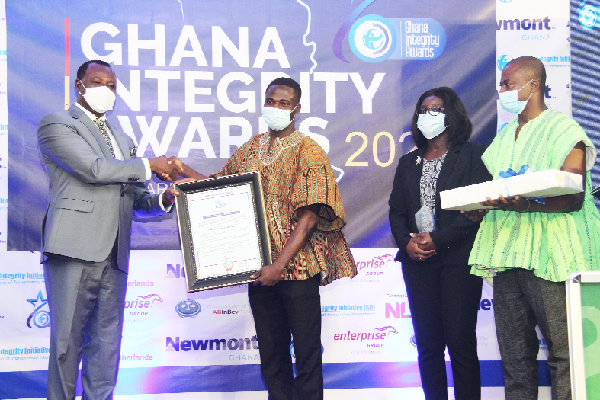 An investigative journalist, Mr Manasseh Awuni Azure, and a police detective at the Kaneshie Police Station, Mr Confidence Fiagadzi, have been crowned the Ghana Integrity Personalities of the Year at the second edition of the Ghana Integrity Initiative (GII) Awards.

At last Thursday’s ceremony, the two were rewarded for demonstrating exceptional courage and determination to fight corruption in the country.

Separate citations presented to Mr Azure and Mr Fiagadzi said as an investigative journalist and a public officer respectively, they had taken fearless steps to promote transparency, integrity and accountability, and broken the culture of impunity of the corrupt.

For Mr Azure, it said his confidence to take on powerful institutions and individuals in the fight against corruption in Ghana had earned him the admiration of the public.

“Your investigative works, titled “Contract for Sale” and “Returned Bribe,” resulted in the removal from office of two senior public officials from PPA (the Public Procurement Authority) and FDA (the Food and Drugs Authority),” the citation said.

For Mr Fiagadzi, it said: “In the line of discharging your duty as a police officer, you have demonstrated the highest form of professionalism, honesty and integrity when on two different occasions you used attempts to bribe you with an amount of GH¢4,000 and GH¢2,500 respectively as exhibits against the accused public officers in court”.

Mr Azure said the honour conferred a responsibility on him to do more.

“It is, indeed, humbling that in a country of over 30 million people, a shortlist of five is presented and that list is associated with integrity and your name is mentioned; I think it is very humbling,” he said.

He further appealed to the Office of the Attorney-General and the Ministry of Justice to up its game by bringing justice to Ghanaians whenever evidence was presented to the office.

He indicated that fighting corruption was very risky, and so it was discouraging when individuals risked their lives to expose corruption only for such issues to be swept under the carpet.

“Sometimes when we talk, the ministry tells us there is no evidence, but with the Contract for Sale investigation, we realised that over GH¢40 million was found in the account of the PPA boss at the time he was in office, but as we speak, nothing has happened.

“There is also evidence that after the Contract for Sale, the Financial Forensic Unit of the Ghana Police Service did a thorough investigation and provided a docket to the Office of the Attorney-General that over GH¢2 million was paid for fumigation services that were never carried out and the Attorney-General’s Department is sitting on the case,” he added.

Mr Azure said the failure to act was not only allowing the wrongdoers to get away with their crime, but a lot of it was being repeated and the country was losing huge sums of money.

Other state institutions that were recognised at the event were the National Commission for Civic Education (NCCE), which was honoured for its transparency and social accountability, and the National Identification Authority (NIA), which also received an award for efficient public service delivery.

The Internal Audit Agency was also recognised for enforcing effective internal control, empowering internal auditors and deepening a holistic understanding of risk to control public resources, as well as the introduction of the naming and shaming strategy of organisations that were not responding to legal requirements for internal audit.