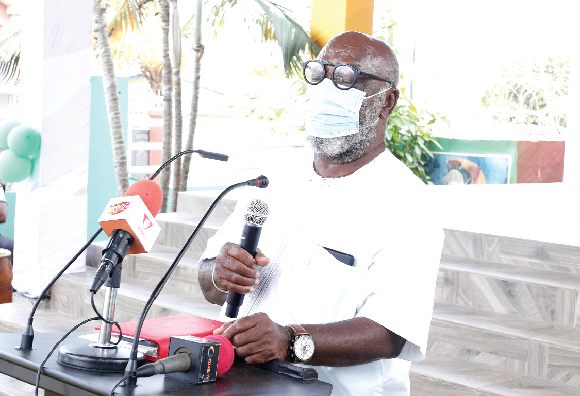 A Communications expert, Prof. Kwame Karikari, has advocated local languages to be made compulsory subjects in schools.

According to him, Ghanaian languages must be studied in all basic and second-cycle schools in the country.

"If we can study English and Mathematics as compulsory subjects in our schools, why can't we do same for our own languages,” he asked.

He said aside from fostering national unity and cohesion, the practice could also accelerate the socio-economic development of the country.

Speaking at the 10th anniversary of Oasis international school at Teshie GREDA Estates in the Greater Accra Region, he said local languages created a unique identity and also promoted values, skills and the culture of the people.

Prof. Karikari, who is also the board chairman of both the Graphic Communications Group Limited and the Oasis school, further expressed concern over the fact that some parents had chosen English as the only medium of communication between them and their children, saying Ghana risked losing its unique identity and culture if the practice did not stop.

"Our local languages will go extinct in the very near future if we don't take measures to remedy the situation," he said.

Touching on the theme for the anniversary: “Celebrating a decade of inspiring a passion for learning”, Prof. Karikari urged parents and guardians to support teachers to train children by making time for their own kids and not leave them solely in the care of schools.

He further encouraged parents to speak their local languages with their children at home, instead of foreign languages.

The Director of the school, Mrs Christine-Marie Nyantakyi, commended parents for their continued support to the school in the training of their kids.

She also expressed appreciation to the teachers for their tireless effort in moulding the characters of children in their care.

Mrs Nyantakyi said the school, which started from humble beginnings with nine children, now had a population of 518 children.

The event was commemorated with spectacular performances in poetry recital, choreography and drama.

Present were the members of Parliament for Ledzokuku and Krowor, Mr Benjamin Ayiku Narteh and Mrs Agnes Naa Momo Lartey, respectively; the Municipal Director of Education for the area, Mr Victor Noye Tawiah, among others.

As part of activities marking the anniversary, the board chairman instituted two sets of awards for Literature and Mathematics in the school.

The awards, which will start from next academic year, will see winners in the two categories receiving cash prizes of GHc1,000 each.