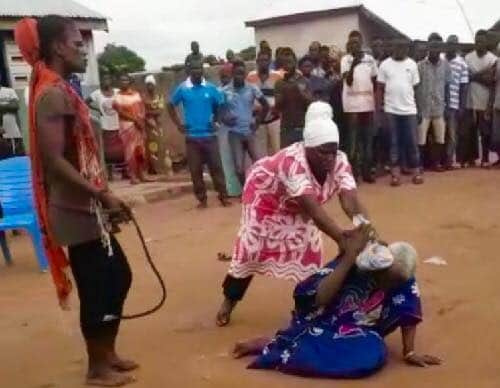 Madam Akua Denteh at the mercy of her attackers Follow @Graphicgh

The Inspector-General of Police (IGP), Mr James Oppong-Boanuh, has dispatched homicide experts from the National Police Headquarters to the Savannah Region to help search for the murderers of Madam Akua Denteh, aged 90, who was beaten to death at Kafaba near Salaga in the East Gonja District for allegedly being a witch.

The IGP has also announced a GH₵2,000 reward for any information that will lead to the arrest of the suspects.

A statement signed by the Director of Police Public Affairs, Superintendent Mrs Sheila Abayie-Buckman, and issued in Accra said the suspects were believed to have fled the town following the incident.

“The Police Administration condemns mob justice in any form and assures the public that it will fish out perpetrators of this heinous crime.

Former President Jerry John Rawlings has called for a serious investigation and arrest of all who were involved in the “cruel and barbaric lynching of a 90-year-old woman accused of being a witch in Kafaba, near Salaga”.

The former President said he was appalled by the violence meted out to frail Akua Denteh, who was accused in an uncivilised manner of being a witch by a fetish priestess and subsequently subjected to lashes and beatings on Thursday, July 23.

In a statement issued on Sunday, the former President said all the security agencies should take the matter seriously and ensure that it was thoroughly investigated, all the assailants apprehended and prosecuted and the appropriate judicial punishment meted out to them.

“The police and other investigative agencies, as well as the Attorney-General’s Department, must ensure that this matter is thoroughly investigated and appropriate charges and prosecution brought against the perpetrators to serve as a deterrent,” the former President said.

“We are in 2020 and such brutal abuse, especially of women, should not be countenanced in Ghana. We rose up in unison when George Floyd cruelly lost his life in the United States. We cannot look on and allow something more callous to happen in Ghana,” he added.

Meanwhile, Samuel Dodoo reports from Damongo that the traditional priestess is resident at Yeji in the Bono East Region, but residents of the East Gonja municipality and the Central Gonja District usually consult her to provide solutions to spiritual issues and exorcise witchcraft from people who have been pronounced witches and wizards.

It was one such encounter at Kafaba that led to the pronouncement of the 90-year-old woman as a witch and her subsequent lynching after trial by ordeal.

In a related development, the Overlord of Gonjaland, Yagbonwura Tuntumba Bore Essa I, has called on his subjects to desist from what he termed "barbaric" acts.

In a statement signed and issued by the Registrar of the Gonjaland Traditional Council, Kapori Abutu, the Overlord expressed shock at the dastardly act that happened at Kafaba.

“The Gonjaland Traditional Council condemns the act, which was committed at the blind side of the traditional authority," it said.