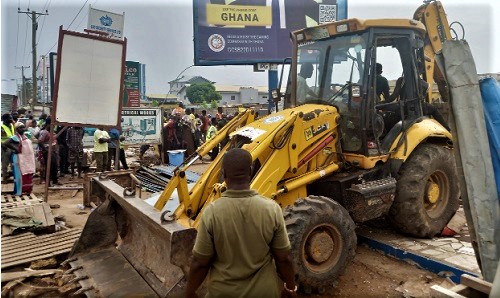 The Chief Executive of the Ledzokuku Municipal Assembly (LEKMA), Mordecai Quarshie, has cautioned squatters along the Manet Junction on the Spintex Road whose structures were recently demolished to refrain from erecting new ones.

He said offenders would be made to face prosecution.

The warning, he said, formed part of efforts by the assembly to enforce bye-laws in the municipality to ensure that the exercise was not in vain.

The assembly carried out a demolition exercise about a month earlier to clear containers and other illegal structures at the Manet Junction area.

Mr Quarshie told the Daily Graphic that the assembly had put monitoring procedures in place, and would not hesitate to prosecute anyone found erecting new structures at the site.

The exercise, executed with the support of the Ayawaso West and La Dadekotopon Municipal assemblies, saw over 200 illegal structures, some of which served as residential accommodation, garages, vulcanising shops, and eateries, brought down by the assembly's taskforce.

While some structures were salvaged by their owners, others were completely destroyed in the exercise.

Some of the victims described the exercise as inhumane and condemned the assembly for the manner in which the exercise was carried out.

Some blamed officials of the assembly for giving them only an impromptu notice, although others admitted there were some announcements to that effect.

However, Mr Quarshie, who led the operation, said adequate notice was served on the affected people.

He said squatters were given enough time to vacate the area, adding that apart from the eviction markings on the structures, the assembly also engaged the people and advised them on the need to leave the area.

He said the occupants had been there without authorisation, and that the exercise became necessary to make way for some road construction earmarked for the place.

The road, he said, would connect the Spintex Road to Nmai Dzor.

"I want to send a strong warning to anyone planning on going back to the site that the assembly would prosecute them without fail," he said.