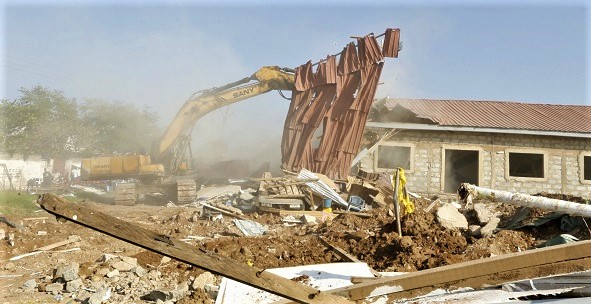 The Ledzokuku Municipal Assembly (LEKMA) has carried out a demolition exercise to clear illegal structures around the A-Life Junction at Teshie.

The exercise, carried out by the assembly's taskforce with support from the 48 Engineers Regiment of the Ghana Armed Forces and police officers from the Kpeshie Divisional Command, affected mainly structures which served as churches and workshops.

The assembly said the action was carried out in furtherance to government’s instruction to metropolitan, municipal and district assemblies to demolish structures on waterways.

Some of the victims, however, described the exercise as inhumane, and condemned the assembly for the manner in which the exercise was carried out.

They also faulted officials of the assembly for giving them just a short notice.

However, the Chief Executive of LEKMA, Mordecai Quarshie, who led the operation, said adequate notice was served on the affected people contrary to their claim.

He said apart from the eviction markings on the structures, the assembly also engaged the people and advised them on the need to leave the area.

Mr Quarshie said the occupants had been there without authorisation, and that the exercise became necessary following the recent floods that affected the area.

He said the owners of the structures would be surcharged for the cost of the exercise.

He also indicated that the assembly would investigate the conduct of some staff of the assembly whose negligence enabled people to erect the illegal structures and recommend punitive measures against them.

Mr Quarshie added that the assembly had earmarked some 320 structures that had been sited along waterlogged areas in the municipality for demolition.

"I want to serve notice that this exercise will not stop until we achieve our purpose," he said.