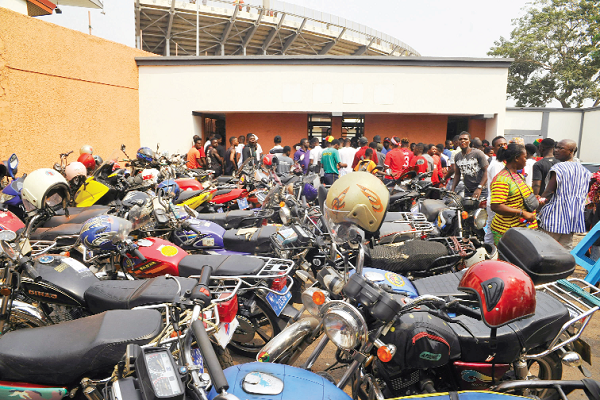 An accident investigator and insurance claim consultant, Mr Anane Frimpong, has cautioned that any attempt to legalise motorbikes for commercial use will lead to more loss of lives and limbs on the country’s roads.

He quoted a Ministry of Transport report, which said motorcycle fatalities increased from 2.7 per cent in 2001 to 21 per cent in 2018, while the National Road Safety Authority (NRA) had estimated that the chance of dying from a motorcycle crash remained 10 times higher than a car crash.

Mr Frimpong, who was addressing a press conference organised by the Ghana Committed Drivers Association, a group of commercial drivers and road engineers, noted that instead of legalising the dangerous trade, governments should address the root causes of the proliferation of using motorcycles for commercial activities, popularly known as Okada.

He said as of the time of promulgating the law banning Okada, motorcycle accidents ranked ninth on the list of causal agents for road accidents.

However, currently, Okada ranked second on the list of causal agents for road accidents, he said.

The insurance consultant said in 2014 alone, figures released by the NRSA indicated that 2,571 people were knocked down by motorbikes, out of which 1,856 lost their lives.

In 2015, he said, 2,289 motorcycles were involved in road accidents nationwide, while in the first quarter of 2017 about 708 road users died from 4,049 accidents, with 3,983 others sustaining varying degrees of injury.

Mr Frimpong recounted a call by the Ghana Medical Association and some medical doctors for a ban on Okada use, with the Head of the Accident, Emergency and Orthopaedic Department of the Korle Bu Teaching Hospital leading the call to save lives.

He said from December 21, 2019 to January 1, 2020, the department admitted 79 victims of vehicle accident, 58 victims of motorcycle accidents and one bicycle accident victim, while between December 22 and 23, 2019, 30 road traffic accidents were recorded, out of which 20 were serious Okada-related cases.

Mr Frimpong said it was the aforementioned increases in accidents that compelled the National Democratic Congress (NDC), with Mr John Mahama as President, to pass the Road Traffic Regulation, 2012 (L.I. 2180), with sections 128 (1) (2) and (3) and 84 of the L.I. prohibiting motorcycle or tricycle use for commercial purposes.

He was of the conviction that the factors that led to the passage of L.I. 2180 by Mr Mahama and the NDC had not changed because people were still dying, sustaining various injuries, riders continued to disregard road safety regulations and people were being robbed at gunpoint and with knives, using Okada, adding that “the situation is dire and we cannot allow this to go on”.

He urged politicians to create a business-friendly environment that would encourage the setting up of more companies to create sustainable and respectable employment opportunities for the youth, focus more on investing in agriculture, expand the road network and fix the railway system.