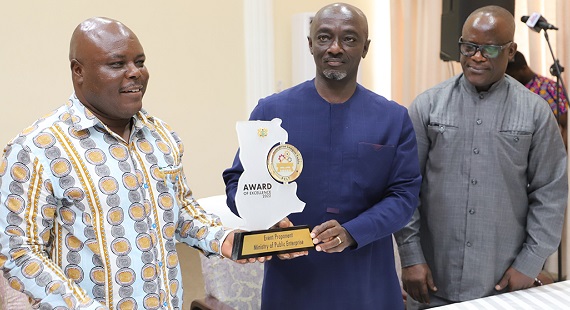 Joseph Cudjoe (left), Minister of Public Enterprises, and Edward Boateng (middle), Director General of State Interest and Governance Authority, displaying the plaque after it was unveiled. With them is Edward Borteye (far right), Head of Public Entities and Asset Division Unit of the Ministry of Finance. Picture: GABRIEL AHIABOR Follow @Graphicgh

The Ministry of Public Enterprises has launched a league table to rank the performance of state-owned enterprises (SOEs) to engender competition among them.

The performance management tool is to enhance efficiency, productivity and the profitability of these public entities.

The initiative, the first of its kind in the public enterprises' space, is meant to honour state companies that are doing well for them to become the best and encourage non-performing ones to be better and return to profitability.

The ranking will be based on how the public enterprises have performed in relation to the contract they signed with SIGA.

It will be on the attainment of the targets as contained in the performance contract and the four areas outlined, as the basis for the ranking are financial and economic considerations to dynamic effects that have to do with innovations and investing in fix assets or maintaining them so that in the future the same assets will generate revenue and record profit for the state.

The third and four dimensions for the ranking are efficiency and productivity and management improvement, respectively.

The maiden award is expected to come off by the close of the second quarter of this year.

A plaque of excellence and the logo for the PELT were also unveiled at the launch.

The Sector Minister, Joseph Cudjoe, who launched the initiative in Accra last Friday (April 29) said the awards scheme would be held annually and was aimed at ensuring that all state companies were managed very well and were profitable to contribute at least 30 per cent to the country's Gross Domestic Product.

"As a management tool, when the company is first it means that company does not need that much attention so far as our resources and energy are concerned because they are on the right path. When the company is last, unlike the soccer league that you go on relegation, the company needs resources in terms of our time, efforts, training, capacity building, among others, to return to efficiency and profitability", he said.

Mr Cudjoe used the occasion to commend President Nana Addo-Dankwa Akufo-Addo for his foresight and vision for the country to ensure that public enterprises would grow and contribute to the country's GDP and create more fiscal space.

He said the President brought that vision into fruition which led to the promulgation of the SIGA Act 990 and the appointment of a Minister of Public Enterprises to oversee to the growth and expansion of the SOEs to become avenues for job creation.

To ensure that SOEs thrived, he said his ministry and SIGA had been implementing good corporate governance practices and making recommendations for restructuring and turnarounds, strengthening the existing performance contract management regime that had been there in the past but did not deliver the desired results.

The Director-General of SIGA, Edward Boateng, said the authority would continue to play its oversight responsibility of ensuring the efficiency and profitability of public enterprises.

He said the PELT, which was an initiative of the sector minister, had come to add an impetus to that responsibility.­