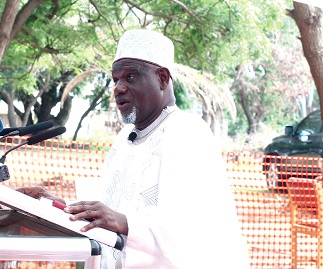 The Ahmadiyya Muslim Mission has called on the Ministry of Education (MoE) to introduce guidelines to regulate religious activities in public schools in the country.

The Ameer and Missionary in charge of the Ahmadiyya Muslim Mission in Ghana, Maulvi Mohammed Bin Salih, who made the call, observed that comprehensive guidelines would be a point of reference to help address future brawls in public schools with regard to faith and religious matters.

His call comes a year after the Wesley Girls’ High School, Cape Coast, was reported to have refused to grant Muslim students in the school the permission to fast during Ramadan, citing health reasons.

“We also entreat the Minister of Education to come out with the long-awaited memorandum of understanding and guidelines on religious activities in public schools.

“We urge the minister to demonstrate leadership through cognizance of the undeniable fact that the absence of peace is always as a result of the absence of justice, and that, as the adage goes, justice delayed is justice denied,” he said.

The Ameer said Christians needed to honour the spiritual tradition and heritage which Muslims shared equally with them by not only tolerating fasting in their schools but also being religiously kind enough to put in the needed applicable measures to facilitate the observance of this act of worship.

He said it should also include other mandatory acts of worship by Muslim students in their schools and see them as a matter of basic human rights.

“The Holy Prophet of Islam, on whom be the peace and blessings of Allah, facilitated Sunday service for his Christian brethren from Najram of South-Western Arabia, situated near the border with Yemen, in his own mosque in Medina when they called on him to discuss religion,” he said.

Muslims throughout the world on Tuesday, May 3, 2022, celebrated Eid-ul-Fitr, the Festival of Breaking the Fast, which is marked after the Holy month of Ramadan.

Fasting teaches the meaning and pain of hunger and thirst so that people who go through that will appreciate those without food and water.

This year’s prayers attracted scores of members of the mission from all over the country to the Bustan-E-Ahmad, also known as the Ahmadiyya Muslim Conference Centre, at Ashongman in Accra.