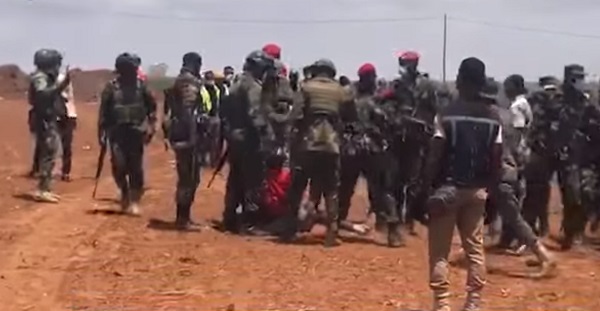 The Ghana Armed Forces (GAF) has apologised to journalists and some other civilians who were injured when it quelled a protest on Thursday (April 15, 2021) at La in Accra.

The GAF in a press release said it had to apply reasonable force to remove the protesters who were demonstrating in an area that houses military installations.

The demonstrators which included groups within the La Traditional Council and the Coalition of La Associations were protesting alleged encroachment of La Stool lands by the military.

The release disclosed that the Military High Command has commenced investigations into the "unfortunate incident".

"The facts of the matter are that in the morning of Thursday 15 April 2021, GAF received intelligence that some civilians were demonstrating and moving towards Burma Camp," the release said.

"A reconnaissance team was dispatched to confirm the report but they could not determine the intentions of the demonstrators. On seeing the soldiers, the demonstrators who had no police permit to demonstrate became violent. The reconnaissance team called for reinforcement which came to stop the violent youth from causing any damage to military installations. It is worthy to note that the general area where the demonstration was taking place, houses vital military installations of national security nature. The implications of any destruction in the area cannot be overemphasized.

In an address before embarking on the protest, a spokesperson for the group, Jeffrey Tetteh said they will not be deterred by the presence of the police to seek the release of the lands allegedly annexed by the military.

“We are willing because our forefathers laid down their lives and they shed their blood to regain this land for us. It is our time to also gain the land and bequeath to those generations after us.”

The land in contention is between Tse Addo and Airport Hills, around the Military Cemetery.