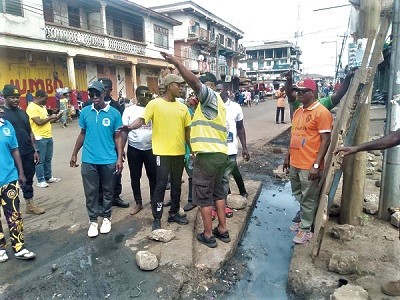 Samuel Pyne (hand raised), KMA MCE, with some staff at Pampaso where some gutters were desilted Follow @Graphicgh

The Kumasi Metropolitan Assembly (KMA) last Saturday organised a cleanup exercise to tidy up the central business district of the city.

For the almost six-hour duration of the exercise, all shops and markets were closed and streets blocked to ensure a successful exercise.

Staff of the assembly, members of social clubs and traders were among the hundreds of residents who took part in the exercise that covered areas such as Dr Mensah, Adum, Pampaso, Aboabo and Bantama streets.

The team desilted the choked gutters at the new Kejetia and the Race Course markets.

The Metropolitan Chief Executive (MCE) of Kumasi, Samuel Pyne, who led the exercise, said the assembly was determined to stop the untidy conditions on the streets and markets across the metropolis.

He said the assembly would be constructing four compost sites across the metropolis and would also place large bins at vantage points to collect waste.

The waste, Mr Pyne said, would be recycled at the compost sites into fertiliser.

He said the siting of the compost plants, which would be rolled out in November this year, was through a €2.5-million partnership deal with the European Union through a three-city project, including Valencia and Praia as beneficiaries.

"We plan to roll out this waste management and sanitation project by November as we begin sensitisation from now, and this would see Kumasi becoming clean as we deal properly with our waste," he said.

The MCE appealed to residents to show interest and take active part in the cleanup exercise as KMA would subsequently be embarking on more of such exercises.

Even though the residents complied with the directive to close their shops, he said he saw that many were idling around without participating in the cleanup.

He said the KMA was currently collaborating with the National Investigation Bureau (NIB) to fish out those who littered the metropolis during the day and night.

"We have staff in the video room of the NIB and we will soon fish out those who litter the metropolis and deal with them according to the law, so that it serves as a deterrent to residents of Kumasi," the MCE cautioned.