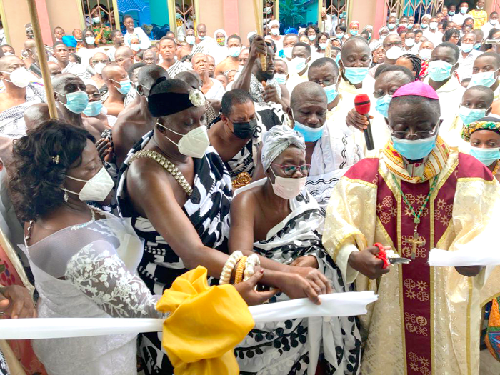 Nana Otuo Siriboe II (2nd left), the Juabenhene and Nana Akosua Akyiamaa II (2nd right) the Juabenhemaa, being assisted by Most Rev. Osei-Bonsu (right) to cut the tape to inaugurate the new Sunday school chapel for the St Stephen’s Catholic Church at Juaben in the Ashanti Region

The Juabenhene, Nana Otuo Siriboe II, has funded and inaugurated a new Sunday school chapel for children of the St Stephen’s Catholic Church at Juaben in the Ashanti Region.

It was in fulfilment of a pledge he made a year ago and also in commemoration of his 76th birthday.

The provision of the chapel also forms part of lined-up projects to commemorate the chief’s golden jubilee celebration, which will be climaxed in December by a grand durbar, with President Nana Addo Dankwa Akufo-Addo and the Asantehene, Otumfuo Osei Tutu II, expected to grace the occasion.

Nana Siriboe also donated an undisclosed amount of money towards the maintenance of the new chapel and planted four commemorative trees on the church premises.

Aside from the church building, which is fully furnished, the premises are also paved.

The main church building, close to the new chapel, has also been tiled and painted, including its fence.

Nana Siriboe last Tuesday was accompanied by some family members and friends, traditional leaders, and some dignitaries to the St Stephen’s Catholic Church for his birthday Mass, where he inaugurated the new chapel for use by the Sunday School.

The Mass was presided by the Catholic Bishop of the Konongo-Mampong Diocese, Most Rev. Joseph Osei-Bonsu.

It was also a regal affair, as guests showed up to honour the Juabenhene, who is also the Chairman of the Council of State.

The celebrant was appareled in a rich black and white Kente and was adorned in silver and a big gold ring, which is a symbol of his authority, as he walked majestically from his palace to the service, followed by a retinue of sub-chiefs and traditional horn blowers.

Among the guests who graced the occasion were the Chairman of the National Media Commission (NMC), Mr Yaw Boadu Ayeboafoh, a former Chairman of the New Patriotic Party (NPP), Mr Peter Mark Manu, and some members of the Council of State.

Delivering the homily, Most Rev. Osei-Bonsu described Nana Siriboe as the epitome of the best in chieftaincy and “a kind traditional ruler.”

He said he was grateful to God for granting the people of Juaben and the Catholic Church such a selfless chief, whose reign had seen nothing but development.

In a short remark, Nana Siriboe said because children were the nation’s future and needed to be given a solid foundation, such as to dwell in the house of the Lord, he was motivated to put up the chapel after the old chapel collapsed while being renovated.

That notwithstanding, he charged the children to as well take their academic lessons seriously, in order for them to grow to become responsible adults and fit well in society.