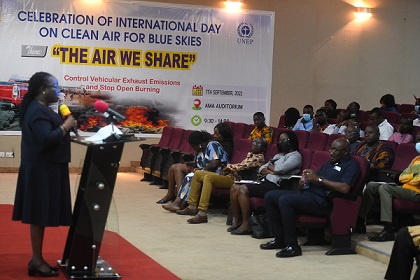 The International Day of Clean Air for Blue Skies has been commemorated in Accra to raise awareness of and facilitate actions to improve air quality.

It was on the theme: “The air we share”.

The day has been instituted by the UN for nations and stakeholders to explore interventions that will prioritise healthy air for the well-being of mankind.

The commemoration was attended by some members of academia, research institutions, development partners, ministries, departments and agencies (MDAs), among other stakeholders.

The Minister of Environment, Science, Technology and Innovation (MESTI), Dr Kwaku Afriyie, in a speech delivered on his behalf by the Chief Director of MESTI, Grace Asare Bediako, called for stronger institutional collaboration to control air pollution and its related deaths.

He said the alarming rate of air pollution-related deaths and the economic implications of the menace called for collective action to address the challenges.

He also cited a recent World Bank report which revealed that the country lost $2.5 billion to air pollution and said the menace was a trans-boundary phenomenon which required concerted efforts to address.

The minister mentioned indiscriminate waste burning as one of the major concerns and called for broader stakeholder collaboration on promoting the use of clean fuel for cooking, proper vehicle maintenance, good driving techniques, as well as the enforcement of environmental laws.

“Priority should also be given to the expansion of the quality monitoring networks in the country to monitor and collect relevant data for studies, policy formulation and effective planning and implementation,” he added.

The Executive Director of the Environmental Protection Agency (EPA), Dr Henry Kwabena Kokofu, said the commemoration was a rallying call for action to improve air quality.

He said the burden of illnesses associated with air pollution, such as cardiovascular diseases, lung cancer and respiratory tract infections, accounted for seven million deaths across the world annually.

The executive director further said the situation was severer in low-income countries where pollutant levels exceeded national and WHO recommended limits.

Again, he said, the agency had built the capacity of scientists drawn from various institutions on air quality monitoring, analysis, interpretation, data management and forecast.

Dr Kokofu added that it had implemented a Greater Accra Metropolitan Area (GAMA) Air Quality Management plan to bring air pollution in the capital city to below the national standard by 2025.

“The implementation of these interventions has resulted in the gradual reduction of ambient particulate matter levels in Accra.

The UN Secretary-General, António Guterres, in a message, urged member nations to enact laws to meet WHO air quality guidelines.

He said it was also important for nations to deliver credible plans to reduce emissions from vehicles, power plants, construction and industries.

According to him, dirty air affected 99 per cent of people on the planet.