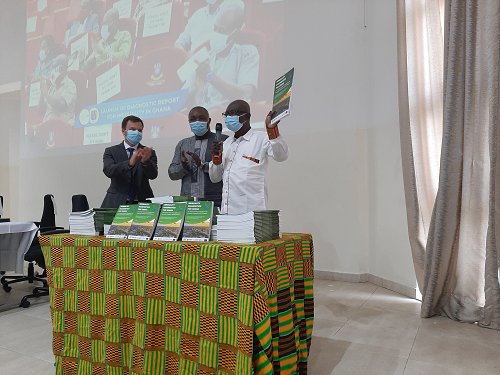 The Pro-Vice-Chancellor of the Office of Research, Innovation and Development (ORID) at the University of Ghana, Professor Felix Asante (in white shirt) launching the report. With him are Prof. Robert Darko Osei (middle), Coordinator of the ACEIR Ghana Node, and Dr Christophe Cottet, Country Director of Agence Française de Développement (AfD).

A new report by the African Centre of Excellence for Inequality Research (ACEIR) has called for a need to further deepen inclusive growth policies and strategies as part of measures to check inequalities in Ghana.

The report, titled: “Inequality Diagnostics for Ghana”, launched on Friday, November 27, 2020, at the Department of Economics at the University of Ghana, said although successive governments have over the years managed to put Ghana on a relatively stable growth path and achieved significant reduction in poverty, inequality still persists in the country.

The report, which provides empirical and policy-relevant data on inequalities in Ghana and produced by a team of researchers at the University of Ghana, explores inequality in household consumption expenditure, wage income for individuals in paid employment and household asset index derived from the ownership of household durable assets.

It was launched by Prof Felix Asante, Pro-Vice-Chancellor of the Office of Research, Innovation and Development (ORID) at the University of Ghana, along with Dr Christophe Cottet, Country Director of Agence Française de Développement (AfD) and Prof Robert Darko Osei, Coordinator of the ACEIR Ghana Node.

Speaking on some key policy issues contained in the report, Dr. Richmond Atta-Ankomah, a member of the research team, noted that Ghana could address issues of inequalities through enhancing general access to social amenities and services by investing more in economic and infrastructure while ensuring that financial constraints for poor households are minimised, as it negatively affect access to some of these services.

For him, enhancing existing social protection programme, by expanding coverage as well as addressing inclusion strategies would help to deal with inequalities in the country.

Dr Atta-Ankomah also called on the government to address regional or locational disparities in the distribution of state resources.

Touching on the report, a member of the research team, Dr. Nkechi Owoo, said the report shows that consumption inequality was on the rise but added that the report also revealed that poverty rates have declined significantly.

That, she explained, the distribution of the gains from growth remains skewed with the non-poor benefitting much more than the poor.

To solve the issue of the non-poor benefitting much more than the poor, Dr Owoo supported the idea of inclusive growth strategies to allow the poor or generally, households in the lower consumption quintiles to participate more meaningfully in the economic growth process and wealth creation.

According to her, expanding the economic opportunities for households in the lower consumption quintiles is crucial for ensuring that consumption inequality trend is reversed so that it does not become inimical to economic growth, peace and stability.

Speaking on some recommendations of the report in addressing inequalities in the country, Dr Monica Lambon-Quayefio, said there was the need to enhance existing social protection programmes by expanding coverage to provide safe nets for the vulnerable ones.

That, she explained, would help sustain the reduction in poverty rates by preventing vulnerable households from relapsing into the poverty category.

Touching on inequalities of opportunities, which she explained as the source of inequality based on factors and circumstances beyond the control of individuals, such as one’s race, religion, ethnicity and location, she called for a deliberate policies targeted at reducing such kind of inequalities.

Dr Lambon-Quayefio said inequalities of opportunities were highly unfair, unjust and unacceptable, pointing out that the distribution of social infrastructure in economic resources ought to be deliberately done in order to create equal of opportunities for all.

On the issue of gender, she said while the gender gap in access to pre-tertiary education has begun to turn in favour of girls, women continue to face significantly constraints in the labour market, earning lower on average and with a higher level of wage inequality and unemployment rate than males.

She has therefore called for the need to intensify efforts at translating increased female attendance rates at pre-tertiary schools to the tertiary level.

The Chairman for the lunch, Prof Asante commended the project team for producing the report, which he described as user-friendly report with lots of recommendations.

“The beauty of the Report is that it is not technical, such that the average person can read it, understand it and use it in his or her work,” he said.

He also charged the research team to make available copies of the report to the various relevant stakeholders in order for the issues raised in the report to be addressed.

Scope of the report