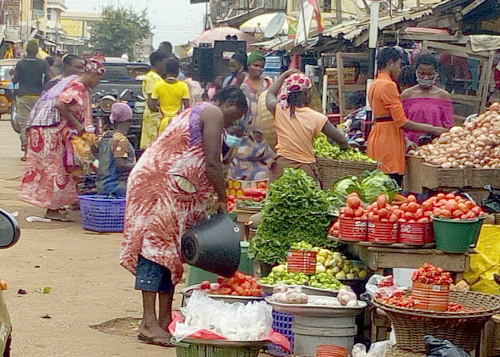 Market women going about their businesses without face masks

In the early phase of the COVID-19 pandemic, the response to the deadly disease in the Bono Region was hailed as one of the best in the country, as institutions and organisations, including churches, participated fully in the control measures.

Residents and visitors were always seen wearing face masks, practising social distancing in public places such as markets and lorry stations, while Veronica buckets were placed at vantage points including lorry terminals for people to regularly wash hair hands.

The political leadership of the region, commanders of security agencies and religious bodies worked hard to ensure that residents complied with the COVID-19 protocol outlined by the World Health Organisation (WHO).

However, the region recorded its first COVID-19 case on May 6, 2020, when a 27-year-old Togolese who entered the region illegally tested positive, making Bono the 13th region to contract the disease since its outbreak in the country on March 2019.

A year on, people in the region have let their guard down in the adherence to COVID-19 safety and hygiene protocols, leading to an increase in the cases.

Currently, Bono is one of the three regions that have emerged as COVID-19 hotspots in the country. The rest are the Bono East and Volta regions.

The region has so far recorded 1,844 cases with 56 deaths since the outbreak of the pandemic in the country.

It currently has a total of 222 active cases made up of 214 mild cases, five moderate, one severe and two in critical condition.

Those in moderate, severe and critical condition are currently receiving treatment at the Sunyani Regional Hospital and the Berekum Holy Family Hospital, while the mild cases are being treated in their various homes.

Statistics available from the Bono Regional Health Directorate indicate that 446 health workers and 290 students have so far contracted COVID-19.

The directorate has identified the Sunyani, Wenchi and Berekum municipalities as well as the Tain District as the four hotspot areas in the region.

According to the directorate, this year alone, the Sunyani Municipality has recorded half of the regional cases.

However, two districts — Berekum West and Dormaa West — have not recorded any new cases of the disease.

When the Daily Graphic visited some public places in the Sunyani Municipality, it found out that most people had abandoned all the COVID-19 safety and hygiene protocols despite the increasing number of cases in the municipality.

Most of the traders were seen transacting business with customers without wearing masks while also disregarding the social distancing protocol, with their attitude suggesting that nothing was at stake.

Most traders at the everyday and Wednesday markets and various lorry terminals have abandoned the daily use of face masks, a mandatory requirement for boarding public transport.

Hawkers, streets and shop traders, clothes dealers, food vendors and cart pushers are no longer paying attention to the safety and hygiene measures.

However, health facilities such as the Sunyani Regional Hospital and Sunyani Municipal Hospital, as well as other government institutions and organisations, have revived the enforcement of the COVID-19 protocol.

At the Sunyani Regional Hospital and Sunyani Municipal Hospital, visitors without face masks are prevented from accessing the facilities.

There are staff who are seated at the entrance of the facilities screening or checking the temperature of persons before allowing them to access the facilities.

In addition, there are Veronica buckets and hand sanitisers at the same entrance for visitors to wash or sanitise their hands.

A 22-year-old trader, Ms Lovia Adomah, told the Daily Graphic that she believed the disease was no longer a threat and that she could do her daily business without observing the protocols.

She explained that getting money to buy face masks was not easy, making it very difficult for her to sustain the practice.

Ms Adomah said she was sometimes compelled to wear a face mask to avoid being arrested by policemen who were sometimes deployed to force traders to comply with the protocols.

“The Delta variant is highly transmissible, that is it infects people easily than the other variants,” Dr Quarshie explained.

He said adherence to the COVID-19 protocols had been reduced in the region, leading to the increase in cases, adding that social gatherings such as funerals and weddings had increased in communities.

“Social gatherings are not supposed to last for more than two hours but some of the church services, funerals and weddings are going beyond the two hours,” he stated and explained that some of them organised the programmes as if "we are in normal times as they refused to observe the protocols."

Dr Quarshie said some health facilities had also abandoned the protocols, explaining that they had sent them notices to start the screening of people who accessed their facilities.

He said the directorate had met with the municipal and districts assemblies (MDAs) to encourage them to rekindle the institutionalisation of the protocols in the district, through revamping of the COVID-19 taskforces.