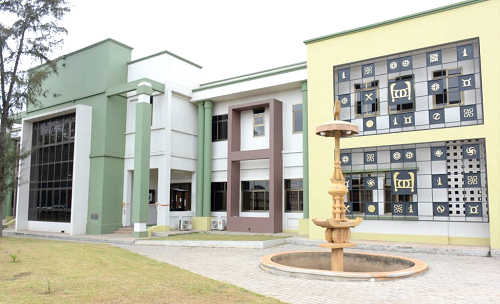 The National House of Chiefs (NHC) has expanded its secretariat to enable it to accommodate more members in the house.

With an increase in the number of regions from 10 to 16, the membership of the house is expected to see a corresponding rise from 50 to 80.

In view of that, the NHC undertook a major renovation and expansion of its headquarters building in Kumasi.

The Minister of Chieftaincy and Religious Affairs, Mr Samuel Kofi Hiave Dzamesi, who inaugurated the refurbished secretariat yesterday, said the chieftaincy institution was a noble one which must be given the necessary recognition to play its role effectively.

Present at the ceremony were the Asantehene, Otumfuo Osei Tutu II, and the President of the NHC, Togbe Afede XIV.

The Asantehene said chieftaincy was a formidable institution which could be used to support national cohesion and development.

He said part of the role of traditional leaders was also to put the government on its toes, but observed that in recent times, it seemed their position had been taken over by civil society organisations (CSOs), thus, making the chieftaincy institution look like a “toothless bulldog”.

Otumfuo Osei Tutu further expressed concern that chiefs had relegated their authority and relevance to the lowest ebb by allowing politicians to dictate to them to serve their interest.

The Asantehene, therefore, urged chiefs to be independent in their decisions and also stay away from political influencers and rather offer advice and suggestions that would ensure peace and accelerated development.

He commended Togbe Afede XIV for his effort in ensuring the completion of the project.

Togbe Afede XIV, who is also the Agbogbomefia of the Asogli State, paid tribute to the late Otumfuo Osei-Agyeman Prempeh 11, a former Asantehene, for donating the building that houses the secretariat of the NHC.

He also expressed appreciation to the current Asantehene for his encouragement and support that led to the timely completion of the refurbishment works.

Togbe Afede XIV further commended his predecessor, Professor J. S. Nabilla (Wulugu Naba), under whose leadership the decision was taken to renovate the secretariat which was in a bad state.

He also thanked members of the renovation committee, who since 2016, successfully raised funds to support the renovations works, and to GOIL, the Minerals Commission, GCB Bank, National Investment Bank (NIB) and the Ghana National Petroleum Company (GNPC), among others, for their financial support.

The Ashanti Regional Minister, Mr Simon Osei-Mensah, gave an assurance that the government would continue to recognise the chieftaincy institution as a partner in development.

He, however, expressed concern about the increasing number of chieftaincy disputes in most parts of the country which the minister said was not only a threat to peace, but also a hindrance to development.

Mr Osei Mensah, therefore, entreated chiefs to find an amicable solution to the disputes to enable the government to carry out its development agenda successfully.