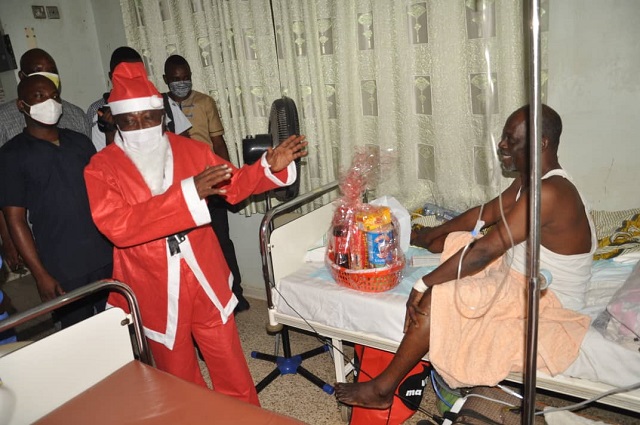 The Executive Director of the Veterans Administration, Ghana, (VAG), Capt. Ben Duah (Rtd), has appealed to Ghanaians in general and politicians in particular to treasure the country's peace and avoid acts that could derail gains chalked up.

He said nothing should be done to destabilize the peace that the country has been enjoying.

Capt. Duah made the call as he led a team of staff from the national headquarters of the Administration in Accra to donate Christmas hampers to the military veterans including retired military officers on admission at the 37 Military Hospital in Accra on Christmas eve.

The Veterans Administration, Ghana boss wondered how sick veterans on admission could run for their lives in the unfortunate situation of violence in the country.

He reminded Ghanaians that Christmas, which marks the birth of Jesus Christ, is about peace and love and for that matter, their activities during the season should be towards consolidating the peace of the country.

The donation was started from the Anoff Ward, which is for military officers, members of the diplomatic corps and members of the general public who can afford the cost of services due to the extra ordinary facilities at the place.

The two-and-half hours exercise also took the team to the Tamekloe, Ward, Medical Ward, Accident and Emergency Ward, Bandoh A and B Wards, Easmon Ward, and Opoku Ward.

Capt. Duah told the veterans that management of the Administration decided to demonstrate its concern and love to those of them who were unfortunately taken away by illnesses from their homes, by coming around to share the love of the season as well as to wish them a speedy recovery.

He said he was not going to wish them a Happy New Year because he expected them to be out of the hospital and join their families in celebrating the New Year.

A nurse of the Tamekloe Ward, Cpl. Tibrowu Moses, on behalf of his colleagues thanked VAG management for the gesture.

Ex Sgt. Manu Mathew, one of the veteran patients said he did not anticipate the visit of the Executive Director of VAG, let alone the donation.

In all, thirteen veterans were presented with the donation.

Flying Officer Adwoa Kwartengma, the officer on duty who conducted the team round, on behalf of the Commanding Officer, Brig Gen Obodai, management and workers of the hospital, expressed profound gratitude to VAG and Capt. Duah for the invaluable gesture, which she said would go a long way to lift up the spirits of the patients.

The practice of presenting gifts to military veterans on admission started in the late 80s but stopped a few years ago. It has, however, been revived by the leadership of Capt. Duah.