Herdsmen ordered out of Nkonya-Bumbula 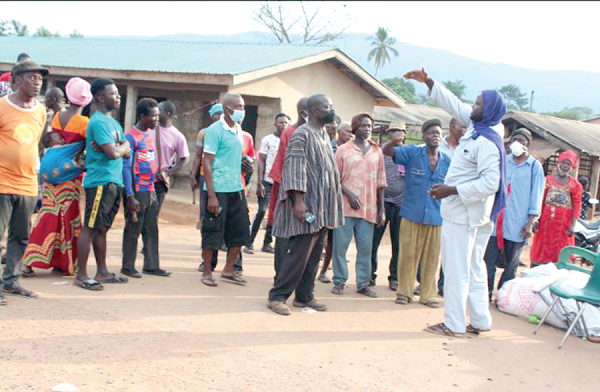 Fulani herdsmen at Nkonya- Bumbula in the Biakoye District have appealed to the traditional authority in the area to give them a two-day grace period to vacate the area following agitation by residents.

It took the timely intervention of the Nkonya Police to save the lives of two herdsmen who were nearly lynched by irate youth in the community. The incident took place yesterday following an exercise led by the chief of the town, Nana Kwabena Osei Brakatu I, to get the herdsmen out of the community.

The herdsmen are accused of destroying farmlands with their cattle.

Nana Brakatu has meanwhile appealed for calm as he liases with the police to get the nomads evicted from the community.

He told the Daily Graphic that the decision to evict the nomads had come after several unsuccessful attempts to get them to stay away from the area.

"The Fulanis have pleaded that we give them two days so they can pack their things and move away with their cattle. I think it is a good decision and so we are waiting.

“They have up to Friday and if they renege then there would be another round of fire on Saturday," he said,

Nana Brakatu complained of the activities of the nomadic herdsmen and their cattle, which he said had led to farmlands being destroyed and livelihoods lost.

He said lands around the Volta Lake were fertile and good for farming, however the activities of the herdsmen in the area had for over a year now, made farming unattractive, with many viewing farming now as a futile venture.

"As a chief, it is my duty  to make sure that my people are not placed at a disadvantage and hence the decision to flush out the nomads," he said.

He said their next course of action would be to apply force should the nomads decide not to leave as agreed.

Meanwhile, the Nkonya Police Commander, DSP David Asirifi, has told the Daily Graphic that adequate preparations are being made to forestall clashes in the community.

He said a meeting had been scheduled with the Biakoye District Chief Executive, Ms Comfort Attah, who doubles as Chairperson of the District Security Council, to find an amicable solution to the impasse.