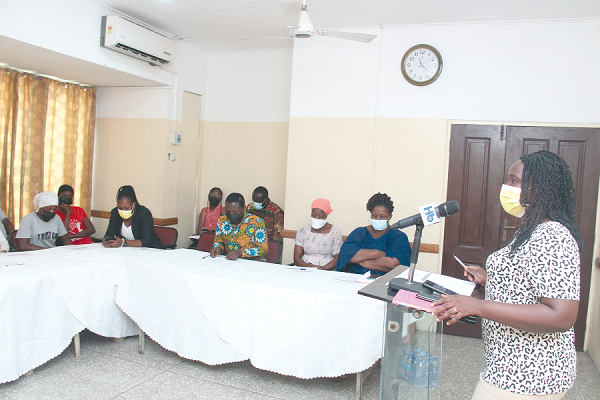 Traditional rulers have been urged to help enforce local assembly by-laws to help the fight against child marriage in the country.

The call, from the Executive Director of Purim African Youth Development Platform (PAYDP), Ms Aku Xornam Kevi, followed increasing reports of child marriage received by the organisation, especially from the northern part of the country.

Speaking to the Daily Graphic on the sidelines of a 2021 review meeting of stakeholders on child marriage, Ms Kevi said the by-laws would put some fear in perpetrators of the criminal acts that affected most teenage girls in areas the practice was rampant.

The review meeting brought together key stakeholders including girls who were beneficiaries of a project being implemented by PAYDP to support victims of child marriage, especially kayayei.

The project, Integrated Legal Literacy, Livelihood Skills Training and Adolescent Sexual and Reproductive Health and Right Services for female head porters (Kayayei), which started in 2017 was to address child marriage as well as Sexual and Gender Based Violence (SGBV) in selected urban markets within the Greater Accra Region, Bono East, North East and Upper East regions.

The objective is to provide kayayei with sexual and reproductive health education and services to empower female head porters to reduce their vulnerabilities and identify cases of child marriage and SGBV.

The meeting was, therefore, to ascertain the impact of the programme this year.

Region when they visited the communities there in recent times to engage the people.

As part of the project, she said a community visit to Walewale and Bongo exposed, aside the cases of child marriage, another criminality against young girls known as “sister in bed”, where a young girl was forced to remain unmarried but sleep with men to produce children for the family.

That she explained, normally happened in families that did not have many male children and therefore, forced the girl to sacrifice for the family to keep their lineage.

“The alarming issue was that the perpetrators did not even consider it as an offence because it was an accepted practice”, she stated.

She said, as part of the way forward, “we are considering making some of the chiefs whistle blowers, so that they will assist the security agencies to ensure that such practices do not continue in their communities”.

“if they are empowered, they would be able to stand against such practices and even escape from the violation of their rights,” she indicated.

Giving a briefing on some of the activities the organisation had engaged in within the year in the fight against child marriage, the programmes officer for PAYDP, Mrs Edna Yebuah, said there had been community forums where 257 people, both men and women, had been engaged on the issue of child marriage.

As part of recommendations on how to tackle the issue of child marriage, Ms Yeboah said partnership with stakeholders must be strengthened to support more marginalised girls within the community and also increase community outreach to promote support for the vulnerable girls.