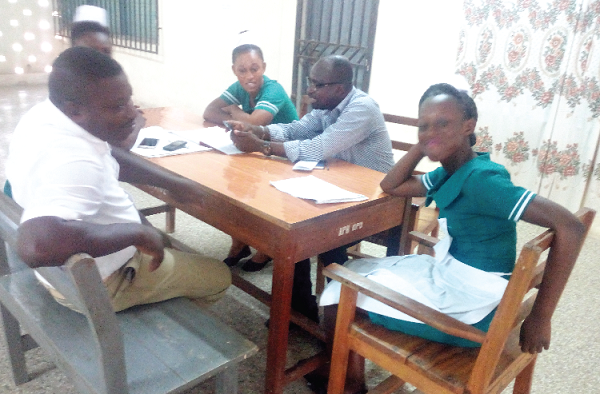 Some of the student nurses holding the fort
30.5k Shares

Psychiatric nurses and physician assistants at the Ankaful Hospital in Cape Coast on Thursday began a strike to back their demand for the immediate removal of Dr Eugene Dordoye as the Director of the hospital.

As of 11 a.m. on Thursday when the Daily Graphic visited the hospital, the nurses and physician assistants had deserted the facility.

Some members of the executive of the Psychiatric Nurses Group (PNG) were seen granting interviews to the media, while student nurses on attachment were holding the fort.

The Public Relations Officer (PRO) of the PNG, Mr Emmanuel Kojo Ofori, told the Daily Graphic that what the group was asking for was that Dr Dordoye should be removed from the hospital and given the requisite training in human resource management and effective leadership, as had been suggested by a fact-finding committee, before he returned to run the hospital.

That, he said, would save the staff from the “physical, emotional and mental torture he has been subjecting us to, as well as give us space to enable us to heal our emotional and psychological wounds, as same is being hindered by his continuous presence”.

A statement signed by Mr Daniel Danso Sarpong, the Chairman of the PNG at the hospital, and two others and issued to the media asked the public to take notice that members of the two groups at the Ankaful Psychiatric Hospital wished to remove themselves from the danger posed to their mental and physical health by Dr Dordoye’s behaviour.

“For the avoidance of doubt, we hereby state that we are not on strike. We are taking this action under Section 119 of the Labour Act, 2003 (Act 651) and, accordingly, we are ready to return to work as soon as he is removed from the hospital,” it said.

On October 20, 2017, the PNG at the Ankaful Hospital petitioned the Minister of Health, Mr Kwaku Agyemang-Manu, to remove Dr Dordoye as the director of the hospital because it alleged that he was “an oppressor who was psychologically traumatising the staff and mismanaging the hospital”.

The group also accused Dr Dordoye of, among other things, “trampling upon the fundamental human rights of the nurses with careless abandon”.