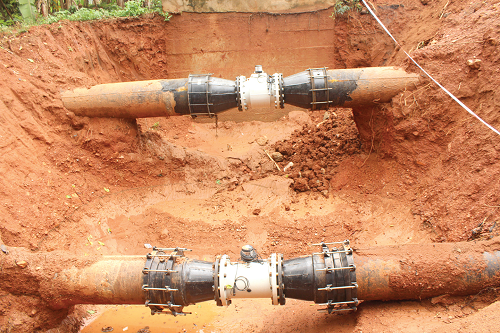 Water is expected to flow through the taps from tomorrow to residents of parts of Accra affected by repair works on the Weija Water Treatment Plant.

The plant was shut down last Monday to allow engineers of the Ghana Water Company Limited (GWCL) to undertake some repair works on its main 900-millimetre transmission pipelines.

The Managing Director of the GWCL, Dr Clifford Braimah, said the repair works had been completed, and that water would be distributed to the communities after scheduled test runs.

Dr Braimah made this known when the Minister of Sanitation and Water Resources, Ms Cecilia Dapaah, joined a team of GWCL officials to inspect the repair works.

He explained that the repair works included replacing faulty valves on the transmission pipelines and repairing leakages within the supply area.

"GWCL engineers will also take advantage of the shutdown to install some electromagnetic meters at the Weija Treatment Plant, which will help in the company’s drive to reduce non-revenue water," he added.

He said the leakages had caused the GWCL volumes of water daily, and that they had impacted the volumes available for consumption.

He said the faulty valves had also impeded the flow of water, causing serious challenges in the distribution lines.

Dr Braimah noted that the repair works were part of a nationwide rehabilitation exercise being done on all water treatment plants across the country.

He noted that it was funded from GWCL’s internally generated funds to improve the supply of water to the growing population.

Dr Braimah was quick to add that the rationing of water would still continue to enable them to supply water to areas that previously did not have access to water.

“That is why we encourage people to store water as rationing of water will continue due to increase in population,” he said.

Dr Braimah also noted that the necessary equipment, logistics, funding and personnel required to execute the repair works were available to complete them on time.

Ms Dapaah later commended the engineers for working on schedule.

She, however, expressed worry about the encroachment on GWCL lands, and asked the company to start processes to demolish structures that had encroached upon their property.