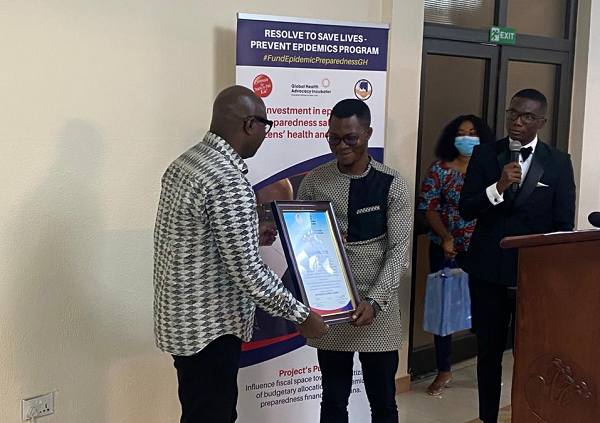 A Senior Reporter with Graphic Online, Zadok Kwame Gyesi, has been adjudged the best print reporter at the maiden edition of SEND Ghana’s awards ceremony on epidemics preparedness and response financing in the country.

Mr Gyesi’s was one of the six journalists awarded at the event which took place in Accra on June 30, 2022.

Other journalists who took awards included Abigail Annoh (Runner up for Print); and Albert Fukpor (Runner up for online); Murtala Issah, Best TV Report while Ridwan Karim received the Best Reporter for the Radio category.

The awarded journalists received citations and undisclosed amounts of money.

Other awards were presented to non-journalists, including Mr. Walter Mawuli Gil, Kwame Gurundoo, Salifu Freeman, and Jane Amerley Oku for their contributions toward SEND Ghana's advocacy in epidemics preparedness and response financing in the country.
Rationale

Speaking at the awards ceremony, SEND West Africa’s Chief Executive Officer, CEO Mr. Siapha Kamara, explained that the rationale behind the award was to encourage journalists to continue reporting on, and drawing awareness to salient health issues in the country.

He said epidemic preparedness and response in every country was crucial, hence the need for journalists to be rewarded to excel in their advocacy campaign.

SEND West Africa, he said, was committed to working with the media to achieve some of the objectives of the Sustainable Development Goals.

Mr Kamara further urged journalists to continue their advocacy work and push for the government of Ghana to commit at least 15 per cent of the country’s Gross Domestic Product (GDP) to the health sector.

“It is only through continuous investment into health that will ensure the country will be well-prepared to better respond to any future epidemic or pandemic that may come,” he added.

For his part, the Country Director (GHAI), Stephen Atasige, expressed appreciation to the media for their continuous advocacy work.

He emphasised that from lessons learnt from COVID-19, it was clear that more advocacy was required to get the government to commit more resources to prepare for the uncertain future.

He assured that his outfit and SEND Ghana will continue to work to ensure other awards schemes for the media in the coming years.

“We look forward to building a stronger coalition with you to strengthen this campaign. We are certain that next year the awards will be bigger and we will have more people to award,” Stephen Atasige said.