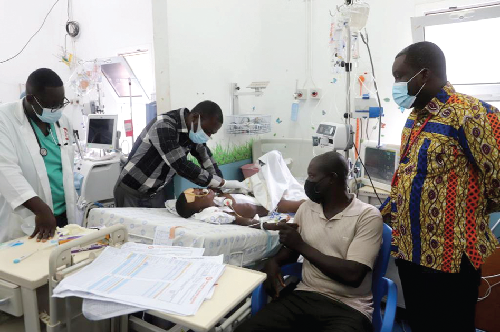 Dr Micheal Amoah (2nd left), Head of the Paediatric Unit, KATH, attending to five-year-old Nborapor after his surgery. Those with them are Mr Martin Sarfo Omari (right), a member of staff of the unit and a sympathiser
30.5k Shares

The Graphic Needy Fund, a trustee committed to helping the vulnerable and people in distress, has supported the ‘colon bypass surgery’ of a five-year-old boy, Nborapor, who ingested caustic soda accidentally.

The ingestion caused the boy to suffer "corrosive esophageal stricture" for about a year, making it impossible for him to swallow solid food.

He has, however, undergone a successful surgery at the Komfo Anokye Teaching Hospital (KATH) in Kumasi in the Ashanti Region.

According to the Head of the Paediatric Unit of KATH, Dr Micheal Amoah, "the boy has survived the surgery".

The Graphic Communications Group Limited (GCGL), which is the trustee of the fund, presented a cheque for GH¢16,000 in November last year to enable the helpless boy to undergo the surgery to save his life.

The Graphic Zonal Manager for the Ashanti, Bono and the five regions of the north, Mr Martin Sarfo Omari, who presented the cheque on behalf of the company, was at the Paediatric Unit of KATH last Friday to monitor the boy’s recovery after the procedure.

"He is doing very well now. Before the surgery, he could not even swallow,” Dr Amoah said, adding that at the moment he was being fed liquid food till he recovered fully.

"We are doing a test on him for 14 days; once he responds steadily, he will be discharged,” he said.

Also present at the ward were the parents of the boy, who were all smiles for the progress in their child’s condition.

Dr Amoah commended the Graphic Needy Fund for its benevolence, saying the move had underscored the GCGL's accolade as the leader in the media business.

He urged parents to desist from keeping corrosive liquids in water bottles and placing them either on top of or inside fridges, since children mostly mistook such liquids for soft drinks.

The parents also thanked the GCGL for the support and prayed that “Graphic will grow from strength to strength and continue to be the trailblazer in the media space”.

According to the father, a peasant farmer, even though he sold all his belongings to help save the life of his son, that was not enough until the GCGL stepped in to support.

The five-year-old boy was spotted by a trustee of the Graphic Needy Fund, in the company of his mother and some relatives, on the streets of Accra, soliciting for money to treat the boy.

According to his mother, they had come all the way from Tatale in the Northern Region to seek help.

Touched by his predicament, the fund triggered the necessary processes to save the boy's life.