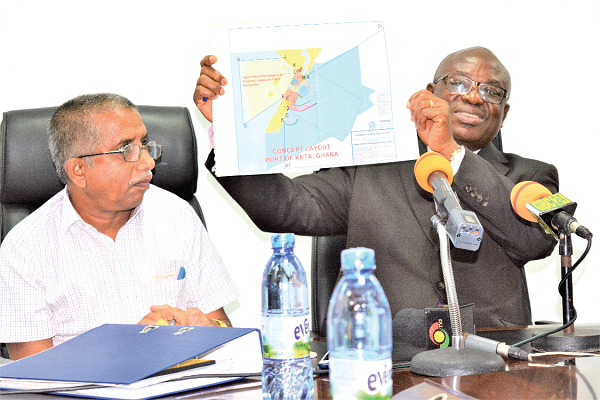 The Ghana Ports and Harbours Authority (GPHA) has signed a memorandum of understanding (MoU) with Diamond Cement Limited for the development of a seaport at Kedzi in the Keta municipality in the Volta Region.

According to the Director-General of the GPHA, Mr Paul Asare Ansah, the signing of the MoU followed a series of engagements between the two entities towards the development of the facility to facilitate the cement factory’s import of raw materials to its base.

Diamond Cement Ltd, which operates in Aflao, currently imports its raw materials, such as clinker, through the Lome Port, thereby making Ghana lose revenue in import duties that would otherwise have accrued to the Ghana Revenue Authority (GRA).

Mr Ansah explained that pending the declaration of the zone by an Executive Instrument (EI) by the President, Nana Addo Dankwa Akufo-Addo, Diamond Cement, under the MoU, would develop a dedicated jetty within the port to be built subsequently.

Speaking to the Daily Graphic at the signing ceremony in Tema, Mr Ansah said the MoU would also provide a framework for the cement manufacturer to build a breakwater to protect the jetty and further undertake reclamation of land space from the sea for the storage of its production materials.

“The MoU gives the company the permission to engage contractors for the project and also initiate the project design, which will then culminate in a concession agreement between the authority and the company,” he explained.

He said the GPHA would go through the approval process of every drawing related to the project to ensure that it met the concept and conditions of the MoU.

Mr Ansah disclosed that areas had been demarcated for a container terminal, a drydock and shipyard services facility, an oil service bay, tank farms, among others, in line with future developments related to a fully operational port within the area.

“It is our hope that people will buy into the concept and submit proposals towards the realisation of the project,” he said.

The General Manager of Diamond Cement, Mr Tati Rama Rao, commended the management of the GPHA for giving the company approval to undertake the project and pledged to abide by the arrangements that had been agreed on.

The Dufia of Kedzi, Togbui Joachim Acolatse, who witnessed the signing, was excited at the opportunities the construction and operationalisation of the facility in the area would create for young people and pledged to assist the company to ensure a successful take-off of the project.