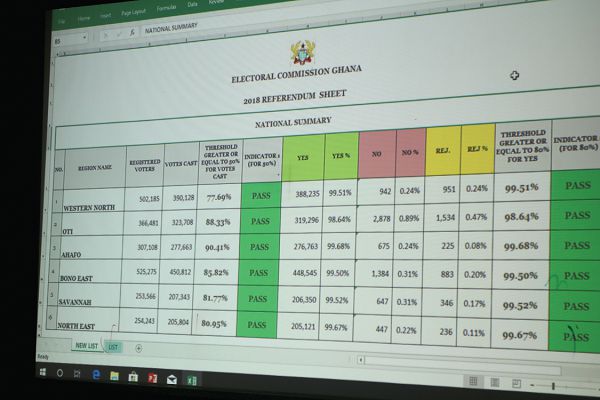 Mrs Jean Mensa, Chairperson of the Electoral Commission (EC) pointing at the results of the referendum at the EC Conference Room in Accra

Declaring the results on December 28, 2018, the Chairperson of the Electoral Commission (EC), Mrs Jean Adukwei Mensa, said all the six proposed regions met the threshold of 50 per cent voter turnout and 80 per cent voting YES.

A summary of the results declared by the EC showed that the NO vote was unable to garner even one per cent of the valid votes cast in the respective regions, with Oti recording the highest NO vote of 0.89 per cent, while Ahafo, with 99.68 per cent, edged North East, which had 99.67 per cent, as the area with the highest percentage of YES votes.

The lowest turnout of registered voters (77.69 per cent) was recorded in Western North.

Some 225 ballots, representing 0.08 per cent, were rejected.

Eight hundred and eighty-three ballots, representing 0.20 per cent, were rejected.

Some 340 ballots, representing 0.17 per cent, were rejected.

Two hundred and thirty-six ballots, representing 0.11 per cent, were rejected.

Responding to allegations of some malpractices in some areas, the EC Chairperson said the allegations, some of which had been captured on video and were circulated on social media, had come to the attention of the commission and that investigations were underway.

In one of the videos, an individual was seen thumbprinting many ballot papers at a place said to be a polling station.

In the second video, someone was seen in an EC-branded polling booth thumbprinting a number of what was assumed to be ballot papers.

Mrs Mensa said the EC would not shield any member of staff, permanent or temporary, found to have violated the law.

"We are waiting to hear from our officials and the security agencies on the line of action to take.

We are not familiar with these officers, investigations are going on and we are also calling on members of the public to present any evidence that they may have to the commission and the police.

Once that is done, we will know the next line of action to take," she said.

Meanwhile, President Nana Addo Dankwa Akufo-Addo has commended the new leadership of the EC for passing its first test by ensuring the holding of free, fair and transparent referenda.

He also applauded the security agencies and the media for the roles they played towards the success of the referenda, which he described as invaluable.

The President also thanked the members of the Brobbey Commission, led by Mr Justice S.A. Brobbey, a retired justice of the Supreme Court, for the thorough and painstaking work the commission did which resulted in the recommendations that received overwhelming, popular endorsement.

Ghanaians, President Akufo-Addo said, by the singular process, had again demonstrated to the world their deep attachment to the principles of democratic accountability and the rule of law.

President Akufo-Addo received a number of petitions from citizens, traditional rulers and communities in the six areas requesting the creation of new regions.

Thereafter, the President set up a nine-member Commission of Enquiry under the chairmanship of Justice S.A. Brobbey, with specific terms of reference to look into the demands and make recommendations.

President Akufo-Addo, as required by law, presented the government’s White Paper on the recommendations of the Commission of Enquiry to the EC for the referenda in the six areas.