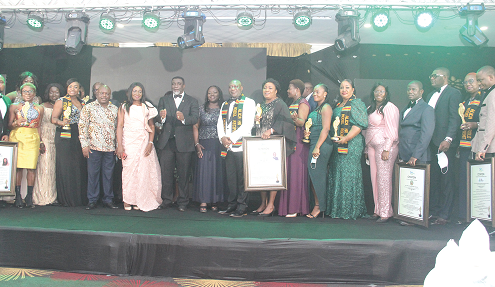 The awardees holding their prizes and citations with invited guests after the ceremony
30.5k Shares

They were honoured for demonstrating superior HR best practices in their respective areas of operation in the era of the COVID-19.

Held in Accra last Friday, the awards, organised by Alica Consulting Limited, a capacity-building organisation, were on the theme, “HR in the New Normal: Leading the Shift from Surviving to Thriving.”

The HR Directors of the Bank of Ghana and Ecobank Ghana, Mr Gloria Darline Quartey and Mrs Daphine Oppong, respectively, jointly won the ultimate prize as the HR Leaders of the Year.

Addressing the event, the Minister of Employment and Labour Relations, Mr Ignatius Baffour Awuah,indicated that for the country to thrive in the post COVID era, businesses required dynamic and professional human resource managers to identify, recruit and build right teams of productive talents that were capable of helping them deliver their industrial goals and objectives.

He further explained that it was only when the private and the public corporates expanded that production would increase desirably while creating more jobs to cure the growing unemployment problem and also help the government to get the needed revenue through taxes for development.

“Looking at the various HR studies, it is beyond obvious that things will never be the same, hence, HR practitioners need to carefully observe and examine the challenges and prospects and be determined to process the lemons to lemonade while taking advantage of the prospects to improve professional delivery,” Mr Awuah said.

He noted that the role of HR manager in identifying, recruiting and building teams sustainably to obtain corporate objectives had not changed but rather, it was the entire corporate atmosphere that required new approaches.

In this new era, he said, virtual communication technology had become more relevant than ever.

Also, he said there needed to be a conspicuous departure from the aged work schedule, where staff and employees stayed in office from 8 a.m. to 5 p.m. from Monday to Friday to a dynamic work schedule and concentrate more on employees’ health and well-being, effectiveness and productivity.

The Minister of Public Enterprises, Mr Joseph Cudjoe, also noted that the advent of the pandemic had imposed a new normal on business which required them to assess and turn the challenges into opportunities by taking advantage of opportunities engendered by technology and new thinking.

Until they do that, he said, they would face the challenge of being left behind.

He said the role of the HR practitioner had changed across all organisations, including governmental, private and non-profit.