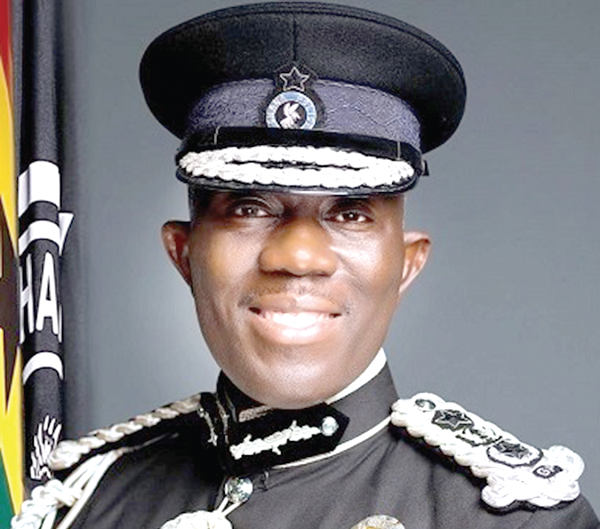 The Police Administration has ramped up security measures, including intensifying patrolling and increasing visibility in crowded areas, across the country to ensure public safety during the festive season.

In line with this, thousands of policemen in uniform and plain clothes have been deployed to various locations throughout the country.

Night patrolling has also been increased, particularly in places the police identify as vulnerable areas.

Day and night checks on some trunk roads by our reporters revealed that the police had mounted checkpoints at close intervals for snap checks and scrutiny and to shorten response times for emergencies.

The exercise is very visible in the Greater Accra Region, especially in Accra and Tema, and the Ashanti Regional capital, Kumasi.

In Accra, aside from the usual police patrol teams in police branded vehicles, other channels of policing, such as motorbike, foot and horse patrols during the day and the use of trained dogs for patrol duties, have all been intensified.

A number of uniformed policemen were seen at places such as malls, banks, traffic intersections, some high-profile residential areas, market centres, among others.

The Daily Graphic team observed that many of the policemen had side arms which appeared new, unlike the old AK47 rifles which were usually used by policemen on guard duties at banks.

The visibility of policemen during the night manning road snap checkpoints was also not missed.

Some of the policemen who interacted with the Daily Graphic said they were very alert in looking out for suspicious elements.

The Director-General of the Public Affairs Directorate of the Ghana Police Service, Assistant Commissioner of Police (ACP) Mr Kwesi Ofori, said the Police Administration had made public safety a top priority and would go all out to ensure that people felt safe as they went about their legitimate businesses during the festive season.

In line with that, he said, full-proof security measures had been put in place ahead of the festivities to avoid any untoward incidents.

He said the police would focus on enforcing road safety, deploying personnel to commercial centres and other public places, as well as monitoring state assets.

“We have covered all areas, as we are also extensively checking the defaulters of traffic regulations, using our CCTV cameras installed at vantage points on highways,” he said.

So far, Mr Ofori said, the annual leave of police personnel had been suspended to ensure that all personnel were on board to take care of security matters for the festive period and beyond.

“The police are already on the ground, so we didn’t launch this year’s Operation Father Christmas. We have taken more elaborate steps operationally to contain any crime during the festive period. We’re on the ground working,” he said.

He said visible security would be in place, along with intelligence surveillance, across the country before and after the celebrations.

Mr Ofori explained that the tight security measures were aimed at ensuring the safety and security of residents and domestic and foreign holidaymakers.

He said policemen would patrol tourist sites and beaches during the December and New Year holidays to guarantee the security of holidaymakers.

“We want the public and holidaymakers to fully enjoy these festivities peacefully, but this calls for everybody’s involvement because bad elements in society may use such joyous occasions to engage in various crimes,” he said.

He noted that the patrolling would help monitor and look out for any anti-social elements and offer help in cases of emergencies.

“We have stepped up security measures and mobilised adequate security men to guarantee safety and the security of all to ensure a trouble-free holiday season,” he said.

The police, he said, would be on high alert and tight security was in place, especially in strategic places such as the beaches, the shopping malls and places of worship.

He also urged the people to strictly follow COVID-19 health protocols during the festivities and called for public vigilance during the season, noting that their role was very crucial in the fight against crime.

“The public must be vigilant, share information, report suspicious characters and their activities to the nearest police or law enforcement officers or call the police emergency numbers through 191 or 18555,” Mr Ofori added.