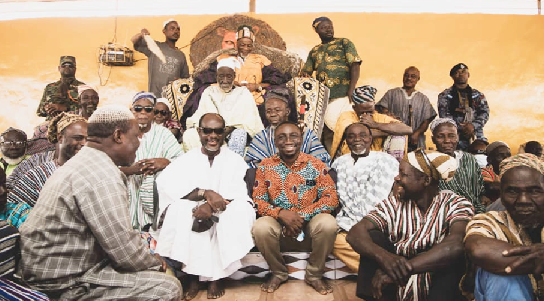 Board members of the DVLA with the Ya-Na Follow @Graphicgh

The Overlord of Dagbon, Ya-Na Abukari II, has commended the Driver and Vehicle Licensing Authority (DVLA) for taking steps to extend its operations to the Yendi municipality and adjoining areas which form part of the Eastern corridor of the Northern Region.

He said the extension of its operation to the area would help curb the rampant use of unregistered and unlicensed motorbikes and vehicles among the youth in the northern part of the country.

The Ya-Na also commended the authority for embarking on an exercise to register more than 5,000 motorcycles within a few weeks last year, and encouraged it to continue with such operations across the region to fight crime and prevent the loss of precious lives.

Ya-Na Abukari made the commendation when board and management members of DVLA paid a courtesy call on him at the Gbewa Palace in Yendi in the Northern Region last Monday as part of their working visit to the region.

The visit was to inspect the new office space and a parcel of land acquired for its satellite operation.

The members also interacted with staff of the authority to understand any challenges affecting their work.

Following an appeal the Ya-Na made to President Nana Addo-Dankwa Akufo-Addo last year for the establishment of an office in Yendi, the DVLA has since acquired an office complex which would soon start operations.

It has also acquired a parcel of land to construct a permanent office complex for the area.

Ya-Na Abukari, who is also a road safety ambassador, emphasised the need for the authority to collaborate with the traditional authorities who were the custodians of the land and major stakeholders in the transport sector to ensure effective service delivery.

“Building a good working relationship with the traditional authority is a form of ensuring all-inclusiveness in the affairs of the country.

“I, therefore, wish to give you the assurance of the readiness of the traditional authorities in Dagbon to collaborate with you to ensure that you do a good job for the country,” the Ya-Na assured.

He expressed how happy he was that over the past few years the authority had made significant improvement in its services, saying “the reports about DVLA is no longer about ‘goro’ boys and unnecessary delays but one of good practices”.

For his part, the Board Chairman of DVLA, Mr. Frank Davies, thanked the overlord for supporting the DVLA to extend its operations to the area and pledged the authority’s resolve to strengthen its collaboration with the traditional authority.

He indicated that the authority was putting together a comprehensive four-year strategic plan which would help enhance its operations and position it as a world-class organisation.

Mr. Davies said valid concerns raised by stakeholders and staff during their interactions would be inculcated in the plan to make it more comprehensive.

The Deputy Chief Executive of DVLA in Charge of Corporate Services, Mr. Kwame Appiah Kubi, for his part, said management, in consultation with the board, were working very hard to improve on the conditions of service of staff to motivate them to give of their best.

“We are working hard to improve on your condition of service, a lot of people will be promoted by the end this year, so you must also work hard to generate more revenue for the authority so that we can do more for you,” he stated.