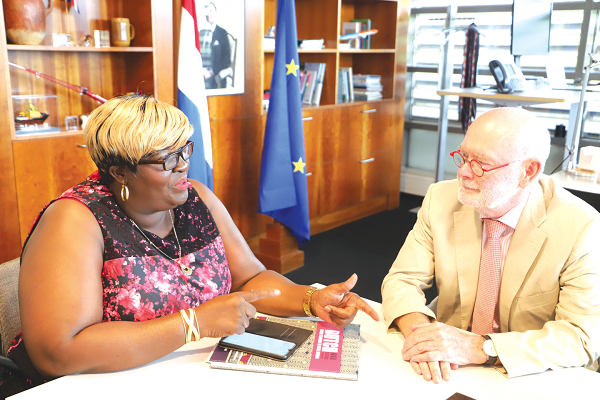 In September 2021, Ambassador Jeroen Verheul assumed a new role as the head of the Netherlands Embassy in Accra, Ghana after being in Dar es Salaam as Ambassador to Tanzania, the East African Community, Madagascar, Mauritius and the Comoros.

Ambassador Verheul started his diplomatic service in 1985 with the Netherlands Ministry of Foreign Affairs and was posted to the European Parliament as an assistant to MEP Bob Cohen. From 1985 to the present he has worked in many disciplines in the Hague, was in Lusaka, Zambia and Ethiopia as deputy head and head of Development Co-operation and was in Paris, France, with the EAC, which also represents international institutions in Africa, the African Union, among others.

The Foreign Editor of the Daily Graphic, Mary Mensah, caught up with the Ambassador who granted an interview following his first anniversary in Ghana. Below are excerpts. MM represents Mary Mensah while JV represents Jeroen Verheul ,the Ambassador.

M: Can you please give us a brief history about yourself and your diplomatic journey so far?

JV: I can say that I am quite an experienced diplomat in the sense that I have been in diplomacy since 1985, that’s almost 37 years and I have mostly been posted to Africa, with my previous post before Ghana as Tanzania and before that I’ve been posted to Yemen, to Uganda, to Ethiopia, to Zambia, to Cameroon. In fact, I am one of the African experts in the ministry.

That’s why they sent me to Ghana and in most countries, you also represent the Netherlands in “Pan-African” countries. So, from Cameroon, we represented the Netherlands, Gabon, Equatorial Guinea, Chad and Central African Republic, among others.


MM: I realised you’ve been in the country for about one year now, so what are your impressions about Ghana so far?

JV: Very positive. It’s a beautiful country. I’ve been able to travel to the Volta Region, to the North, to Cape Coast, and to Ashanti Region, Western North. So, we’ve been travelling around the country also, in the Upper East Region where the President inaugurated one of the water treatment plants that we provided from the Netherlands. So, my impression of Ghana is that it is a beautiful country with a huge potential. The only negative thing I need to note is that the economic situation has deteriorated quite severely since I arrived. And that is, of course, a matter of concern, not only to Ghana but also to us.

MM: The Orange Cocoa Day was an initiative of the Embassy. What informed that decision?

JV: The Netherlands and Ghana have a long-standing relationship on cocoa. And most people don’t know that The Netherlands is one of the biggest importers of cocoa in the world. The harbour on the port of Amsterdam is the biggest cocoa port in the world. So, most of the cocoa is stored or shipped through Amsterdam. We have a very long and financially important relationship on cocoa. And since not a lot of people know about the Netherlands and cocoa, we decided to organise Orange Cocoa Day to make visible what the role of the Netherlands is with regard to cocoa and chocolate.

MM: Why the Orange Cocoa Day? Why the colour orange?

MM: Is the cocoa day going to be a yearly affair? My information was that the maiden one was organised last year, can you share with us some of the outcomes?

JV: Absolutely. This is something that we want to do every year. And I said this is meant to make visible what the role of the Netherlands is in cocoa and chocolate. It is also meant to discuss things that are of interest to the sector and where we want to bring stakeholders together so that they can discuss what should be done about the cocoa sector in Ghana.

MM: What are some of the benefits and lessons from the last cocoa day organisation?

JV: Last year’s cocoa day was about the professionalisation of the cocoa farming and we supported the project with Solidaridad, West Africa, which introduced business centres, rural service centres that provide business services to farmers. And we wanted to showcase that lesson learnt because those rural service centres can help farmers to professionalise their performance in their cocoa production. And that was a very good experience and we offered a platform for Solidaridad to showcase that lesson for the sector.

MM: That means cocoa farmers were part of it last year?

MM: This year’s theme is: “Exploring how improved access to land and tree tenure promote sustainability in the cocoa value chain,” What informed the theme?

MM: In the global cocoa trade, the European Union (EU) is the world’s largest importer of cocoa, accounting for 60 per cent of world’s import and the Netherlands is a major cocoa processor and exporter.

MM: As The Netherlands is also the main importer of cocoa beans from Ghana, how can Ghana take advantage of EU/Netherlands trade?

JV: One of the areas that we as an embassy are interested in is to see how we can promote local value addition. Because what Ghana now does very well is produce and prepare the cocoa for export to The Netherlands” and processing is done in The Netherlands. We have seen more and more companies diversifying their processing in the sense that they are also putting processing plants in Cote d’ Ivoire and in Ghana.

MM: So, what is the current focus of Netherlands-Ghana bilateral ties especially with regard to investment partnership?

JV: I would say that the ties between Ghana and the Netherlands are excellent. They are long-standing but they are of excellent quality. Evidenced, for example, by the recent visit of the President of Ghana to the Netherlands, he was invited for the African Adaptation Summit in Notre Dame and after that summit, our Prime Minister, Mark Rutte invited the President to come for a bilateral working visit so that we could discuss cooperation in two main areas.
Obviously, cocoa is one of the areas because we’ve discussed that already. And the other area where we want to enhance cooperation is in agriculture.

In the world, the first one is the United States, the second one is us. And the total value of our export is about 110 billion Euros, which is slightly less than twice the size of Ghana’s gross domestic product. And you must know that we are living on a land which is in total about 35,000 square kilometres.

MM: What do you think we should do to try and emulate where we can also get gallons of milk from our cows?

JV: That’s a really challenging question. I’ve been posted in Tanzania and as I said, we have been promoting the diary industry. And that has been a journey of at least four years. And there, we’ve been able to find cross-breeds because the cows that we use in the Netherlands cannot stand the climate in the tropics.

If you bring them here, they will die instantly. So, those high-yielding cows that we have in the Netherlands cannot survive here. So, you need to have cross-breeds between high-yielding cows and strong indigenous African cows. And we did that in Tanzania. But that process takes quite a long time. So, that is one thing you need to adapt your system to — the context that you are working on.

MM: Netherlands, I understand, has been in the forefront of offering scholarships for Ghanaian students to study abroad. Can you shed some light on this?

JV: This is the Netherlands fellowship programme which is a competitive process. Since the programme started some 30 years ago, more than 5,000 Ghanaians have benefited and this has been very successful because we have some world-class education institutions in the Netherlands.

We usually have between 50 to 100 Ghanaian students pursuing various disciplines in the Netherlands every year and we look at niche-level career as we try to share our expertise through our education institutions through the fellowship programme.

MM: The Russian-Ukraine war seems to be taking a toll on the world’s economy with thousands displaced and many killed. How can the global community avoid such crisis in the future?

JV: I think, first of all, by calling a spade a spade. If you talk about Russia-Ukraine war, then it looks like there are two people who are equally guilty to be blamed for the conflict. But in this case, we should talk about the Russian aggression against Ukraine. Because Russia invaded a sovereign country. And through that invasion, this conflict erupted. Without the invasion, there wouldn’t have been a Russia-Ukraine conflict.

MM: What is preventing them from pronouncing it?

So, the ICC has opened investigations into war crimes and crimes against humanity in Ukraine because that is currently their mandate. But they should also be able to pursue the crime of aggression in this case. And I think, by setting examples like that, that these crimes do not go without impunity, you can make a change.