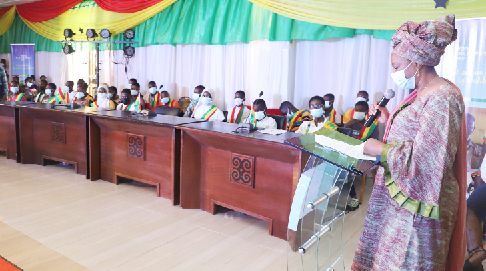 Dr. Afisah Zakaria (right), Chief Director of the Ministry of Gender, Children and Social Protection, addressing the children at the event.
30.5k Shares

The premises of the United Nations Children's Fund (UNICEF) in Accra came alive last Friday, when the agency, together with scores of children, unveiled a child rights mural to commemorate this year’s International Children’s Day.

The large paintings on the wall, which depicts a colourful visual concept of the world that children aspire to live in, was inspired by the views of a reimagined future through art shared by children across the country.

Featured in the art work are various Adinkra symbols that represent values of support, harmony, strength among others — all of which are elements demonstrated by UNICEF in its mission of realising the rights of children.

The unveiling ceremony was the latest in a series of child-engagement activities to mark the International Children’s Day.

UNICEF had earlier organised the national child parliament that enabled children to speak about issues that needed urgent attention for a better world.

The children, who joined UNICEF officials responsible for providing humanitarian and developmental aid to children worldwide to commemorate the day, also displayed various placards with several inscriptions and different messages.

Some of the inscriptions read, “Girls should be listened to and empowered to stay in school”, Every school should be connected to the Internet so we can play and learn online”, “Young people should be involved in decisions that affect them”, “No child should be forced into marriage”, “Every child should live in a clean environment”.

“Books and learning materials should be available in every school”, among other messages.

The occasion was graced by some diplomatic envoys and government officials.

One of the children, Ms. Melissa Obeng Kyere, who spoke on behalf of the children, expressed gratitude to the country for adopting the United Nations Convention on the Rights of the Child (UNCRC).

“It was the beginning of a good thing after the adoption and today, we are here as beneficiaries of the process.

“We are talking about active work on survival, protection, participation and development,” she said.

The United Nations (UN) Resident Coordinator, Mr. Charles Abani, explained that the day was not just to celebrate children but to listen to their concerns.

The Chief Director of the Ministry of Gender, Children and Social Protection, Dr. Mrs. Afisah Zakariah, commended UNICEF for its good work in supporting the government towards ensuring the realisation of children’s rights in the country.