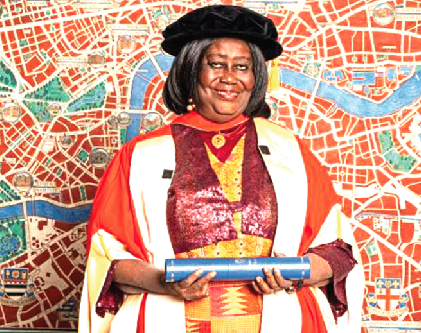 The University of London honorary degree is the highest honour conferred on exceptional individuals to celebrate their contribution to advance human progress and welfare.

To qualify for this award, the nominee should be an outstanding individual with significant achievement and distinction, must have excelled in their field of endeavour and command international and/or national recognition.

The candidate may have a specific connection to the University or to London and have substantial achievements in his or her lifetime.

The achievements could relate to academia, public service, business or the arts and the nominee should also be a person who has made an outstanding contribution to the university’s reputation, mission or objects over a period of time.

Mrs. Chinery-Hesse’s distinguished career and outstanding achievements over the years match the objectives of the award.

A staunch defender of human and women’s rights, and an advocate for African issues, including conflict resolution and humanitarianism, Mrs. Chinery-Hesse has been an extremely influential and important voice on economic development issues.

Her early career saw her as the Senior Principal Secretary of the Ministry of Finance and Economic Planning in Ghana, as well as a Member of the National Council for Higher Education.

Among her numerous high-level posts was membership on the Council of African Advisors of the World Bank and the Eminent Persons’ Advisory Panel of the Organisation of African Unity (OAU), which crafted the strategy to convert the organisation to the African Union (AU).

Mrs. Chinery-Hesse’s worldview and natural leadership instincts have enabled her to chalk up many historic roles.

She was the first ever African woman appointed by the United Nations (UN) to assume the position of Resident Coordinator of the UN Systems and Resident Representative of the United Nations Development Programme (UNDP), serving in New York, Sierra Leone, Tanzania, the Seychelles and Uganda.

Her next role, equally historic, was her appointment as the first-ever woman Deputy Director-General of the International Labour Organisation (ILO), after 70 years of the founding of that UN agency, a position with the rank of Under Secretary-General of the UN.

This, once again, gave her the distinction of being the first African woman to attain the position of Under Secretary-General in the history of the UN.

Mrs. Chinery-Hesse has served in various capacities within the UN system and other international bodies, including serving as Chairperson of the UN’s Consultative Committee on Programme and Operational Questions for several years, Membership of the Zedillo Commission of Eminent Persons on Financing for Development and the UN Blue Ribbon Panel of 16 wise world leaders on Threats, Challenges and Change, which was tasked to rewrite the global security architecture and reform of the United Nations, in particular the Security Council.

For many years, the Chancellor was a member and Chairperson of the Board of Trustees of the Voluntary Fund for Technical Cooperation of the UN High Commissioner for Human Rights in Geneva, Switzerland.

Her advice continues to be actively sought and valued by many governments and international organisations on a variety of themes.

Mrs. Chinery-Hesse also served as the Chairperson of the Commonwealth Expert Group of Eminent Persons on Structural Adjustment and Women, which produced the landmark Report, “Engendering Adjustment”.

She was a member of the Board of the prestigious Global Humanitarian Forum in Geneva, Switzerland, on which she served with several Nobel Peace Prize Laureates.