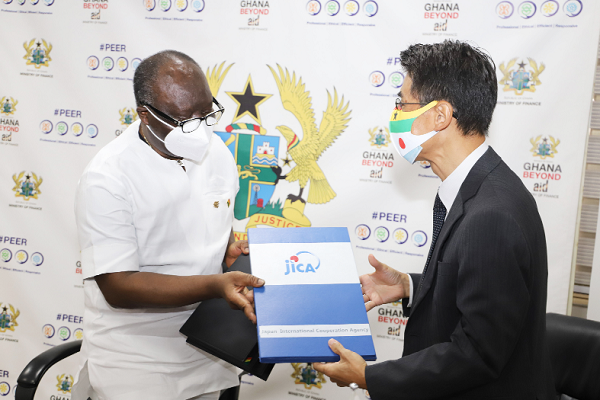 The government has secured a $35.5 million grant from the Government of Japan to fund the construction of the Tema Motorway Roundabout Phase Two in the Greater Accra Region and the rehabilitation of the National Truck Road (N8) in the Central Region.

Some $33.2 million of the amount is earmarked for the Phase Two of the Motorway Roundabout project, which includes the construction of a flyover linking the Tema Motorway to the Akosombo
Road to complement the phase one that was inaugurated in June last year.

The remainder will be used for the phase two of the N8 project.

The grant agreement was signed in Accra yesterday.

It was witnessed by the Deputy Minister of Roads and Highways, Mr Stepen Pambiin Jalulah.

The signing ceremony followed the exchange of notes between the two countries on the grant agreement on September 10 this year.

The projects are expected to improve transportation in the Tema Metropolis and the Assin Fosu and Assin Praso areas.

Japan funded the construction of the phase one of the Tema Motorway Interchange.

Mr Ofori-Atta expressed appreciation to the Japanese government for the support to Ghana.

He said the grant facility further underscored the important role that Japan had played in the development journey of Ghana since the 1970s.
The minister also commended Japan for the support it extended to Ghana to enhance its fight against the COVID-19 pandemic.

He said such supports made it easier for Ghana to confront the effects of the pandemic head-on and eased the impact on lives and the economy.

The Deputy Minister of Roads and Highways said the project was critical to Ghana’s development as it would help to improve travel time and cost for both local and international transport.

He commended the parties that put together the agreement, stating that it was initially difficult to come to a consensus on some of the details.

“We have fought hard to sign this additional financing to rehabilitate the 31.2-kilometre Assin Praso to Assin Fosu road and then add another tier to the Tema Motorway Interchange. This is to ensure that the travelling experience on the N8 corridor and the Tema Motorway Interchange is further enhanced and its capacity sustained over the designed period,” Mr Jalulah said.

He said the implementation process would have to be accelerated to make up for the two-year delay.

The Chief Representative of JICA Ghana Office said the agency would support government’s efforts to make Ghana the transport hub of the sub-region a reality.

He said the Ghana-Japan cooperation had led to the construction of about 760 kilometres of roads and bridges nationwide.