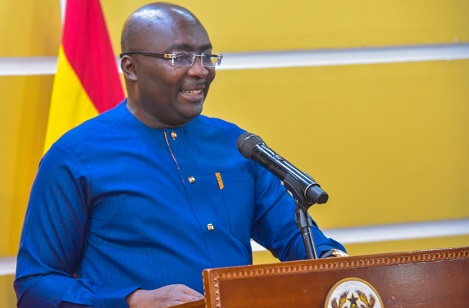 Henceforth, students in tertiary institutions will not need a guarantor to access loans from the Students Loan Trust Fund (SLTF).

With this policy, a student only needs an admission letter and the Ghana Card to access the loan.

This followed the launch of the ‘No Guarantor Students Loan Policy’ by the Vice- President, Dr Mahamudu Bawumia, last Wednesday at the Kwame Nkrumah University of Science and Technology (KNUST).

Present at the ceremony were Vice- Chancellors of public universities, a Deputy Minister of Education, Rev. Ntim Fordjour; the Ashanti Regional Minister, Simon Osei-Mensah, and some metropolitan, municipal and district chief executives.

Also present were some tertiary and secondary school students from the region.

At the launch in Kumasi, he said the policy was aimed at making tertiary education accessible to all Ghanaians.

He stated that it was also in fulfilment of a manifesto promise made by the ruling New Patriotic Party (NPP) during the 2020 election to remove barriers to accessing financial support for tertiary education.

Dr Bawumia said the guarantor-free loan application for students was one of the benefits of the digitalisation process being undertaken by the government build the economy.
“This is one of the benefi ts we derive as a country by prioritizing digitalisation. When we said that we were entering the fourth industrial revolution and we were going to build a data based economy with digitalisation as anchor, many people didn’t quite understand us,” he said.

According to the Vice President, the current world order required that every economy was digitalised, adding that “If you don’t digitalise, you
can forget it.”

He said the Ghana Card “gives us all the data we need about the students to take a decision about their loan and we are very confident that card provides us all the information we would need to recover the loan.”

Dr Bawumia indicated that an echo-system was being built around the Ghana Card such that it contained all the information one needed on the passport, including digital address, would be embedded in the card.

“The Ghana Card number is now your National Health Insurance Scheme number, your Social Security and National Insurance Trust (SSNIT) number, and Tax Identifi cation Number (TIN), and from July we will link all your bank accounts to your Ghana Card number,” he said.

Dr Bawumia said the implementation of the Free Senior High School (SHS) policy opened the floodgates for more people to have access to tertiary education.

However, he pointed out that due to lack of funds, some brilliant students were unable to access tertiary education and for those who were able to do so, the requirements for the students loans were such
that some were unable to qualify for it.

The Minister of Education, Dr Yaw Osei Adutwum, said there was a correlation between tertiary education enrolment and development of countries.

According to him, even though the country’s tertiary education enrolment was more than twice that of
the sub regional average, there was more to be done.

He said the tertiary education of the sub Saharan Africa was nine per cent while that of Ghana was 20 per cent.

The “no guarantor” policy, according to him, would ensure that more students got enrolled into tertiary institutions to acquire skills and build human capacity for the development of the country.

The Executive Director of SLTF, Nana Kwaku Agyei Yeboah, admitted that getting guarantors to help students secure a student loan was a big challenge to most students.

As a result, he said only a few qualified students secured the loans to pursue their education.

The new policy, he explained, would help more students to access financial help for their tertiary education.

It would also bring more pressure on the trust to find more sources to fund its activities.

The President of the National Union of Ghana Students (NUGS), Dennis Appiah Larbi-Ampofo, expressed gratitude to the government for the policy.

He was, however, worried that the loans accrued interest while students were still in school and, therefore, called for the anomaly to be corrected.