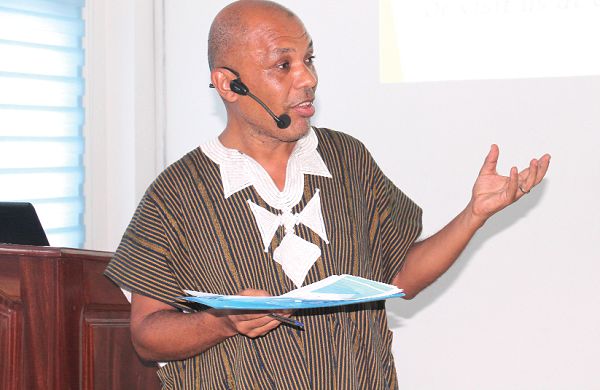 Agricultural scientists at the University of Ghana and a private company, HJA Africa, have developed a new organic fertiliser that can help farmers to increase crop yields by a minimum of 40 per cent.

The liquid fertiliser can be applied on vegetables such as cabbage, sweet pepper, tomatoes, onions and carrots; fruits as well as tree crops such as cocoa and mango.

The product was unveiled at the fifth West African Organic Conference (WAOC) at the University of Ghana (UG) last Thursday.

In a presentation at the WAOC yesterday, the Chief Executive Officer (CEO) of HJA Africa, Mr Henry Abraham, said: “This product is a relatively cheaper way for farmers to increase the yield size of plants and it will offer access to affordable fertiliser that will make sustainable improvement to agriculture in Ghana.”

He said results of recent independent scientific trials of the product had been excellent on farms, including pest-infested farms.

“In one trial, our product gave a yield increase of over 40 per cent and outperformed standard NPK fertiliser, while costing less than a tenth of the NPK equivalent. And combining NPK and OFA gave even better results.

“In another trial, OFA was shown to be effective against the major maize pest, Fall Army Worm, and raised “green” (pre-drying) yields by an amazing 80 per cent to 102 per cent, compared to an untreated farm area,” he said.

He said after the trials by the crop scientists from the UG, there had been good feedback from farmers across the country who used the organic fertiliser.

Mr Abraham indicated that the OFA would provide an opportunity for Ghanaian farmers, many of whom were unable to access the government’s subsidised fertilisers, to increase their crop yields and profits.

“And better-off farmers who are already using fertilisers can increase their yields even further by complementing their existing fertilisers with OFA, in many cases while also reducing their overall expenditure on inputs,” he stated.

He gave an assurance that in order to meet the demand for the new product, HJA Africa and its partners, who were already working with the Council for Scientific and Industrial Research (CSIR), were in a position to produce substantial quantities of the OFA product.

“Extrapolating the University of Ghana trial results, our current OFA production capacity can already add the equivalent of another 20 per cent to Ghana’s current fertiliser supply.

“That has the potential to generate a 1.6 per cent increase or more in Ghana’s overall crop yields, worth at least GH¢100 million a year to the economy,” Mr Abraham indicated.

He further assured: “So potentially we will be adding eight per cent or more to the country’s crop yields within a couple of years. This could in turn add an impressive GH¢560 million or more annually to Ghana’s agricultural output.”

He added that due to the huge opportunities for social and commercial benefit from OFA, HJA Africa would need $5 million or more investments to expand production to a level equivalent to doubling Ghana’s current fertiliser use.

Meanwhile, at the end of the conference, the participants called on African governments to support smallholder farmers and players in ecological and organic agriculture with the right technologies to boost food security on the continent.

They said supporting stakeholders in the organic value chain with sustainable technologies and demand-driven research activities would help overcome the challenges to scale up organic agriculture in Africa.

“It is imperative for countries to set up a knowledge management instrument for effective communication and exchange of technologies in organic agriculture among stakeholders in Africa,” they stated.

Delivering the resolution on behalf of the delegates at the closing ceremony of the event last Thursday, the Secretary of the Ecological and Organic Agriculture Initiative in West Africa, Dr Olugbenga O. AdeOluwa, said: “There is the need to strengthen national, regional and continental platforms and think tanks for technology development in organic agriculture.

“We agree that organic and ecological agriculture play important roles in fulfilling the African Union’s Agenda 2063 and contribute to the Sustainable Development Goals (SDGs) and the transformation of national and regional economies,” they stated.

The four-day event, which was held on the theme: “Organic agriculture: Life for all”, attracted 350 farm-based groups, researchers, investors, entrepreneurs, processors, input manufacturing entities from 30 countries across Africa and other parts of the world.

They discussed ways of exploring the potential of organic agriculture to transform national and regional economies, and protect the health of farmers, consumers and the environment.