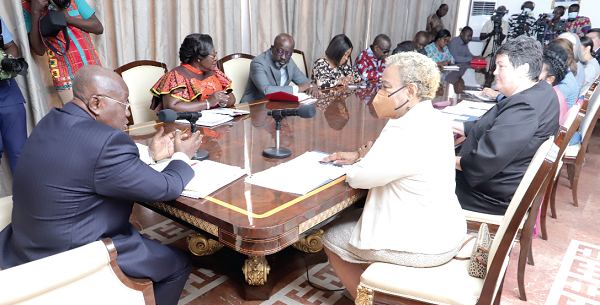 President Akufo-Addo addressing a delegation from the US Congress at the Jubilee House in Accra Picture: SAMUEL TEI ADANO
30.5k Shares

President Nana Addo Dankwa Akufo-Addo has called for more US investments in the country, particularly in the rail sector.

He said the country had embarked on the expansion and development of rail infrastructure and that there was space for the US which had expertise in that area to also invest in the sector.

The President recounted how at the beginning of the country’s independence, Keizer from the US helped in building the Akosombo Dam and the VALCO Aluminium smelter, which he described as major US investments that had paid dividends over the years.

He made the call when he received a delegation of US Congressional members at the Jubilee House in Accra yesterday.

Led by its Chairperson, Barbara Lee, the bi-partisan sub-committee on State and Foreign Operations provides overall oversight of US investments in USAID programmes, State Department and all non-defence initiatives throughout the world.

He described Ghana’s relations with the US as very important and said: “We will continue to work to improve, expand and deepen our ties”.

President Akufo-Addo further said that Ghana, which was a functional democracy and had changed governments through the ballot, would be celebrating 30 years of uninterrupted republican constitution next year, adding that “elections have gone on without shaking the foundations of the state”.

On security, President Akufo-Addo expressed concern about the growing threats and work of jihadist groups who were unleashing terror on citizens in some West African countries.

He traced the commencement of activities of the terrorist groups in the sub-region to when Muammar Quaddafi was removed from power in Libya and said since then, the jihadists had been waging wars in Mali, parts of Togo, Burkina Faso and Cote d’Ivoire.

He gave an assurance that the government was determined to work within the confines of its finances to ensure that the jihadists did not extend their activities to the country as it established military bases along neighbouring borders.

“It is an ongoing struggle but it is one that we are determined to win because we want this country to continue to be the beacon of peace and stability,” the President added.

President Akufo-Addo further said the government was collaborating with neighbouring countries in the sharing of information on intelligence and security through an Accra Initiative to combat the menace.

He, however, called for both financial and logistical support to complement the efforts of the sub-regional body to deal with the issue of terrorism.

President Akufo-Addo also acknowledged the contribution of the European Union and the UK and entreated the US government to also extend more assistance, saying “we have the quality personnel, who, when properly trained and motivated can win this fight”.

Ms Lee said the committee was in the country, the first leg of their African tour, to reinforce the US relations with Ghana and to also know the extent to which US taxpayers’ money was being expended in the country.

She said as part of their oversight responsibility of the foreign assistance programme, they had already visited some US-funded projects in the country.

According to Ms Lee, the satisfactory execution of the projects would inform their decision to recommend additional support for Ghana as part of efforts to strengthen relations between the two countries.