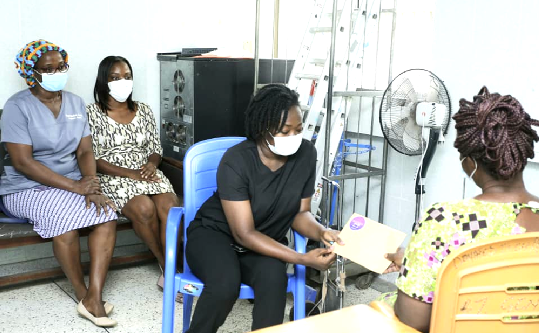 NICU Soldiers, an advocacy blog that focuses on Neonatal Intensive Care units (NICUs), has presented GH¢5,000 to a mother whose baby is on admission at the NICU at the Korle Bu Teaching Hospital in Accra.

The donation is to subsidise the cost of oxygen for the baby, who has been on admission for the past three months.

The Founder of NICU Soldiers, Ms. Efia Akese, said the money was part of funds raised through her Scone For Life project launched last month.

Last month, the advocacy blog partnered Fiona Foods, a catering company, and Jumia Logistics Services to raise funds for some preterm babies on oxygen whose parents could not afford their oxygen bills.

The month-long fundraiser to support the initiative was in commemoration of the World Prematurity Day, which is observed on November 17, every year.

Every Friday in November, Jumia Logistics delivers scones and pies baked by Fiona Foods to people in Accra and its environs. Others also made cash donations to the fund.

“At the end of the fundraiser, we were able to raise GH¢38,155.83, but last week a donor decided to round the figure up to GH¢40,000,” Ms. Akese, who is also a journalist with the Graphic Communications Group Limited (GCGL), said.

She explained that proceeds from this year’s fundraiser would be used to support parents at the Korle Bu Teaching Hospital, adding that beneficiaries were selected in consultation with the management of the NICU at the hospital.

Ms. Akese expressed gratitude to Fiona Foods, Jumia Logistics Services, as well as anyone who contributed towards the success of the project, for the support.

She said next year, her blog would choose another facility to support, saying “the NICU journey is stressful, so I hope this financial support for parents can relieve some of their stress”.