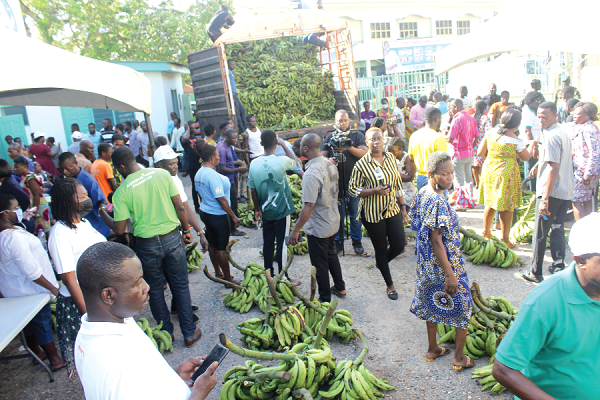 Some civil servants and members of the public buying plantain at the MoFA market. Picture: ERNEST KODZI
30.5k Shares

The Ministry of Food and Agriculture (MoFA) will continue to pilot the sale of produce from the Planting for Food and Jobs initiative, with tubers and cereals expected to be on offer at the special market on the premises of the ministry today.

The pilot, targeted at civil and public service workers, will have the sector minister, Dr Owusu Afriyie Akoto, in attendance to personally serve patronisers.

It will follow in the pattern of last Friday’s maiden sales, which retailed plantain and rice.
Despite the limited target, some members of the public from far and near besieged the sales grounds last Friday for relatively affordable food items.

The measure, the ministry explained, was necessitated by the rising cost of food prices, supposedly impacted by transport costs and alleged retailers’ push for super-normal profits.

The first truckload of plantain from the Western North Region arrived at the ministry at 8:30 a.m., but by 10:30 a.m. the items were sold out.

The Public Relations Officer of the MoFA, Tanko Bagbara, explained that the initiative was part of the ministry’s effort to mitigate the impact of rising food prices in the country.

He said the programme was initiated after the sector minister expressed the government’s intention to transport food from the rural production areas to Accra to deal with rising food inflation.

“When the minister embarked on his five-region tour of the Western North, Western, Central, Volta and Oti regions, it was clear that we have so much food so he decided to intervene with the idea to cart the food items to the ministry and then scale it up,” he said.

“The food items are coming from the PFJ initiative under the cocoa rehabilitation programme. When cocoa trees were cut down, we wanted a livelihood intervention that can sustain the farmers and this is coming from the Western North,” he said.

He indicated that some private sector institutions had already expressed interest to partner with the ministry on the initiative.

He said the ministry had also directed all regions to set up the farmers’ market, adding that Central Region had taken the lead with a good response.

Some buyers on MoFA premises commended the ministry for the initiative while others were not impressed with the prices of the food items.

A civil servant, who gave her name only as Patricia, said although she bought a bunch of plantain for GH¢20 she was expecting the price to be much lower since some markets such as the Madina Market had also reduced their prices.

Ms Beatrice Asante, on the other hand, thanked the ministry for the initiative and said she bought a bunch of plantain for GH¢15 at the ministry, a size which would have cost GH¢40 at the markets.

She urged the ministry to continue to provide food items at lower prices.

Another buyer, Beatrice Boateng, reiterated that the prices were good compared to the current prices on the market.

“I bought a bunch of plantain for GH¢15 but on the market, it would be GH¢40 even if you get to the market at dawn,” she said.

Yet another buyer, Abdullai Ibrahim, suggested that the special market be moved to the local markets for easy access.