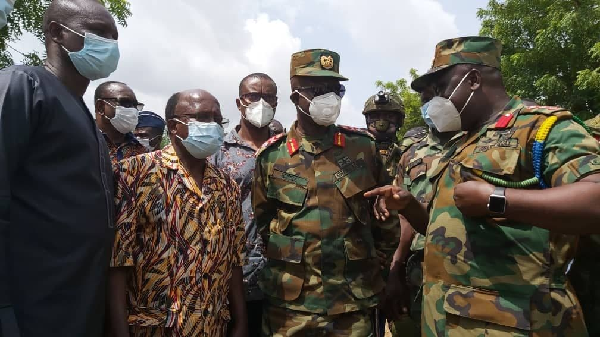 Ghana and Togo have resolved a long-standing land boundary dispute between the two countries at the Pulmakom border in the Pusiga District in the Upper East Region.

At a meeting between the Ghana Boundary Commission and the Togo Lands Commission at Cinkassé in Togo last Thursday, it was agreed that per the legal and national demarcation documents of 1927, the Kolpelig River, a tributary of the White Volta, was the official boundary separating the two countries.

Over the years, there had been disagreements between the two countries regarding a pillar and landmark boundary along the Kolpelig River situated between the towns of Konugu in Togo, and Gariki and Beliting in Ghana .

While the local and traditional authorities at Cinkassé claimed that the boundary was beyond the river towards Gariki, their counterparts at Pusiga also maintained that the Kolpelig River was the accurate demarcation separating the two countries.

The situation led to the Togolese authorities preventing their counterparts in Ghana from constructing a bridge at Gariki and extending electricity to Beliting.

The meeting at Cinkassé, therefore, was meant to chart a new path towards ending the long-standing boundary dispute between the two countries.

The National Coordinator of the Ghana Boundary Commission, Major General Emmanuel Kotia, said following the joint discussions and a visit to the places of contention, the two countries clearly understood the issues and subsequently resolved the matter.

He explained that there was a map produced in 1927 that had the Kolpelig River as the internationally accepted boundary separating the two countries, but which was misunderstood by some Togolese.

“We had a very fruitful discussion after jointly going round the areas of contention and agreeing that we go back to the legal document that was established as far back as 1927,” the coordinator said.

He further said the two neighbouring countries also agreed that places which were not accessible to Ghanaians should now be opened, adding that “we have also come to the understanding that our security agencies should now patrol the areas”.

Going forward, Major General Kotia, who is also a defence and security expert, said the boundary commissions of the two countries would continue to work together to construct new boundary pillars to avoid recurrence of the dispute.

Additionally, he said the commission would ensure that a joint sensitisation programme was carried out for the people of Cinkassé and Pulmakom to understand the outcome of the meeting.

“I think there is a breakthrough as far as this discussion is concerned and we hope that the peaceful coexistence that exists between the people of Cinkassé and Pulmakom would continue,” the coordinator said.

He further explained that the mandate of the commission was to work towards resolving boundary disputes between Ghana and its neighbouring countries.

The Secretary to the Lands Commission of Togo, Mr Douti Lardja, said the Kolpelig River was the boundary between the two countries and that they had agreed to bring a permanent resolution to the matter.

He said traditionally and historically, the people of the two countries were the same, for which reason the misunderstanding over the boundary should not mar their peaceful coexistence.

Mr Lardja gave the assurance that his government would abide by the agreement.

He, therefore, called on the traditional authorities in both Cinkassé and Pulmakom to sensitise their people to fully appreciate that the Kolpelig River was the internationally accepted boundary separating the two countries.

The meeting was attended by the traditional authorities from both Cinkassé and Pulmakom.